WAVERLEY BALL [1], THE. Scottish, Reel (whole time). A Major. Standard tuning (fiddle). AABCCD (Hunter, Lowe): AA’BB’CC’D (Cranford). Composed by Joseph Lowe (1797-1866), a dancing master and musician of Inverness and Edinburgh, who published a collection of dance music in 1844. Lowe's "Waverly Ball" refers to chapter XLIII entitled "The Ball" in Sir Walter Scott's novel Waverley; or 'Tis Sixty Years Hence (1814), where the protagonist meets with Bonnie Prince Charlie. In a homage, and as a fundraiser for a monument to Scott, the first costumed Waverley Balls were held in London and Edinburgh in 1844 under the patronage of Prince Albert. There,

...the élite of rank and beauty vied with each other in their varied dresses. Persons attired in the costume of foreign countries, or remote ages, were seen commingling with others in the gay habiliments of the modern ball-room, while the embellishments around tended to recall the memory of him who had described the feudal grandeur and festive scenes of our baronial halls, as well as the characteristic manners of our virtuous and industrious peasantry.[1]

There were Waverley Balls in subsequent years as well, notably in 1871. See also Lowe's companion strathspey "Waverley Ball (2) (The)." 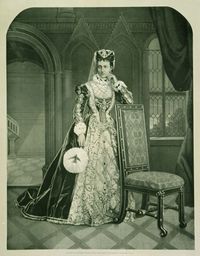 Her Royal Highness Alexandra Princess of Wales, as she appeared at the Waverly Ball in the character of Mary Queen of Scots. c.1874-87 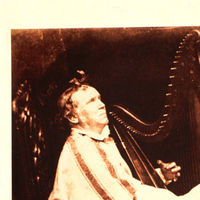 Patrick Byrne, the blind Irish harper who was known throughout Great Britain; he played before Queen Victoria at Balmoral in 1850. Here he is playing a harp larger than the Irish harp. The photograph was taken by Edinburgh photographers Hill & Adamson, perhaps for the occasion of the the Waverly Ball in Edinburgh in April, 1845, where he was installed as one of the "tableaux vivants", to represent the last of an ancient bardic tradition.