WAYS OF THE WORLD [2]. Old-Time, Breakdown. A Major. AEae tuning (fiddle). AABBCC. Not related to “Ways of the World (1). The source for modern versions of the tune is Magoffin County, Kentucky, fiddler William Stepp (1875-1947), who was recorded by Elizabeth and Alan Lomax for Library of Congress in 1937. When the index cards for the recording were typed up, explains Kerry Blech, the name Wm., for William, was rendered ‘W.M.’ and this error was repeated for many years. The fiddler’s name was actually William Hamilton Stepp. Bruce Greene theorized that the tune was misnamed either by him or his source, and that Stepp’s tune was similar to tunes Greene had heard generally played in the key of ‘A’ and going by the “Who’s Been Here Since I’ve Been Gone” title. Greene may have been talking about local Kentucky tunes, for the tune that usually goes by the name “Who’s Been Here Since I’ve Been Gone” does not sound like Stepp’s “Ways of the World.” Although played mainly in the key of ‘A’, crosstuned as Stepp played it, some fiddlers maintain it sounds better to their ears played in G with the fiddler tuned GDad. 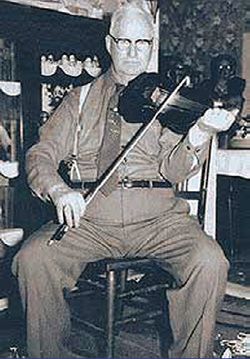 
See also listing at:
Hear W.H. Stepp's recording at Slippery-Hill [1] and at youtube.com [2]