Back to We're a' dry wi' drinking[edit]

WE'RE A' DRY WI' DRINKING. Northumbrian. The title appears in Henry Robson's list of popular Northumbrian song and dance tunes ("The Northern Minstrel's Budget"), which he published c. 1800. There is a nursury rhyme dating from at least the early 19th century that goes: 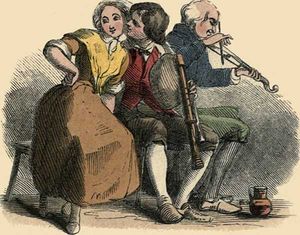 An illustration of the rhyme from Harry's Ladder of Learning (1850)

Back to We're a' dry wi' drinking[edit]