Back to Welcome Brother Debtor[edit]

WELCOME BROTHER DEBTOR. AKA - "Welcome, Welcome, Brother Debtor." AKA and see "Brother Debtors," "Debtor's Welcome to their Brother." English, Air (3/4 time). G Major. The song, by Irish-born Charles Coffey (d. 1745), was originally entitled "The Prisoner's Ballad; or, Welcome, Welcome, Brother Debtor, &c. The True Copy of which was Never Printed Before"; it appeared in Prisoner's Opera. The original air used in the opera was a different one than appeared with they lyric printed in the latter 18th century. The original air is an older one, often employed in ballad operas and especially for sea songs (see "Sailor's Complaint (The)"). The words were printed in Calliope, or, The Musical Miscellany (1788, Song 238, p. 441, directed to be sung to the air "Cease Rude Boreas") and other 18th century songsters. The first couple of stanzas go: 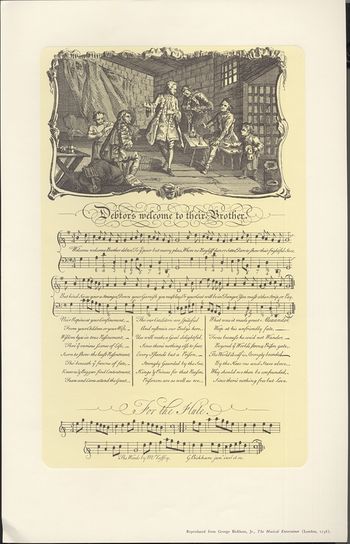 Welcome, welcome, brother debtor,
To this poor but merry place;
Where no bailiff, dun, or fetter,
Dare to shew a frightful face.
But, kind Sir, as you're a stranger,
Down your garnish you must lay;
Or your coat will be in danger:
You must either strip or pay.

Ne'er repine at y our confinement
From your children or your wife:
Wisdom lies in true resignment,
Through the various scenes of life.
Scorn to show the least resentment,
Though beneath the frowns of fate;
Knaves and beggars find contentment;
Fears and cares attend the great.

The melody is contained in the music copybook [1] of John Buttery (1784-1854), a fifer with British army's 37th (North Hampshire) Regiment of Foot (so designated in the army reorganization of 1782), who served from 1797-1814. Later in life Buttery emigrated to Canada, where he died. In his manuscript Buttery identifies the tune as "A Retreat", which in military use represents the musical announcement of the end of the day's activities and a time for rest. The operant condition for a retreat was a specific drum roll, over which a melody--any melody--could be played, and it was the drum roll (not the tune) that was the musical signal for a retreat. The Buttery manuscript, as well as other period military manuscripts, often include a variety tunes that are labelled 'Retreats', which were selections the musician employed for the duty. Buttery's manuscript collection has also been identified as belonging to John Fife [1], with a suggested date of 1780. Fife was a family name, like Buttery, identified with the manuscript. "Welcome Brother Debtor" was among those played by British bands the evening before their surrender at Yorktown, in keeping with their anticipated encarceration.

Back to Welcome Brother Debtor[edit]