WELLS HUMOUR. English, Country Dance Tune (3/4 time). E Minor. Standard tuning (fiddle). AAB. “Wells Humour” was first published under that title in Henry Playford’s Dancing Master [1], 11th edition (London, 1701). The tune and country dance directions ("Longways for as many as will") were retained in subsequent editions of the long-running series, through the 18th edition, then published by John Young in 1728. The melody was also published by John Walsh in his Compleat Country Dancing Master (London, 1718, with later editions in 1731 and 1754). “Wells Humour” was not the original name of the tune, however, which was the product of English composer Henry Purcell (1659-1695). His Hornpipe in E minor (Z607/4) forms part of the suite from William Congreave's Restoration comedy The Old Bachelor [2], for which Purcell composed the music, probably around 1691 (although the play was not produced until 1693). It is sometimes called “Purcell’s Hornpipe.” 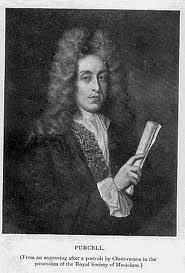