Find traditional instrumental music
This is the stable version, checked on 30 June 2022.
Jump to: navigation, search

Back to Wellington's Advance

WELLINGTON'S ADVANCE (Ruatair/Ruatar Uellington). AKA - "Pilleadh Wellington." Irish, Double Jig (6/8 time). A Dorian. Standard tuning (fiddle). AABB. The tune is commemorative of the Duke of Wellington, England's Napoleanic Wars hero. So popular was the Duke with the British that his image graced a number of taverns and inns named for him…although this did not guarantee patronage in and of itself, as the following story relates: 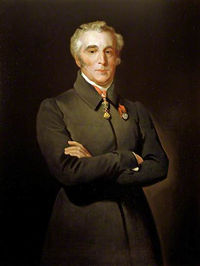 The worthy Boniface of a small inn in the neighborhood of Liverpool, not less known by its sign of the ‘Gray Ass’ than by the virtues of its home-brewed ale, having taken it into his head that his symbol was scarcely commensurate with the dignity and importance of his establishment, resolved to change it the first fitting opportunity. The result of the battle of Waterloo, so exhilarating to all loyal Englishmen, afforded him an excellent excuse for carrying his intentions into effect. He accordingly imployed an intinerant artist to paint him a picture of the Duke of Wellington, which he substituted for the effigy of poor Neddy. In the meantime, a shrewd rival, who knew the value of a name, took a house immediately opposite mine host of the ‘Wellington,’ and adopted his discarded sign. The country people, who knew more of the character of the ‘Gray Ass’ than of the qualifications of the great captain of the age, all flocked to the inn designated by their favorite appellative, until at length the elder publican had little or no custom left. Finding that his friends were ebbing from him like a spring tide with a breeze from the shore, he bethought him of an expedient to put a stop to the desertion. The derneir resort was to attach to the portrait of his Grace of Wellington a supplemental panel, containing, in huge and legible characters, the following pity inscription: ‘This is the Original Gray Ass!’ It is scarcely necessary to add that the intimation had the desired effect. .... (Hawkwood, 1909)

The first strain is shared with "Biddy McGee (1)", which has American blackface minstrel associations.

Back to Wellington's Advance