Find traditional instrumental music
This is the stable version, checked on 16 December 2020.
Jump to: navigation, search

Back to Welsh Fair 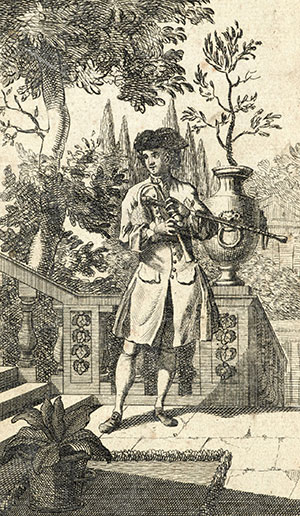 Irish Piper John Geoghegan
WELSH FAIR. English, Country Dance Tune (4/4 time). D Minor. Standard tuning (fiddle). AB. During the 18th century there were several fairs held in and around London that were called Welsh Fairs. The suppression of the Welsh Fair at Southwark in 1744 was the event of a considerable riot at which more than one person was killed. The annual Welsh Fair, or Gooseberry Fair, was held at Whitsuntide in or near the Spa Fields, but afterwards was removed to Barnet.

It is worthy of remark, that any persons who should presume to perform any interlude, tragedy, comedy, etc., at this fair, were by order of the Lord Mayor to be prosecuted. Spa Fields, within recollection, had its pasturage for cows; and her lay, south of the New River Head, a forest of elm-grees, destined to convey water in their hollow trunks to the north and western parts of London. Spa Fields became the hotbed of Radical politics in 1817. The whole district is now covered with houses. [from Miller & Macaulay's periodical The Leisure Hour, June 1, 1887, p. 366]

Back to Welsh Fair