Find traditional instrumental music
This is the stable version, checked on 2 July 2020.
Jump to: navigation, search

Back to Westminster Hall (2)

WESTMINSTER HALL [2]. English, Country Dance Tune (3/2 time). D Minor. Standard tuning (fiddle). AAB. “Westminster Hall [2]” appears in a supplement to Henry Playford’s Dancing Master, Part II, 2nd edition (section II, No. 31), published in London in 1698. Westminster Hall is outside Westminster Palace and was the site of several famous trials, including that of King Charles I. Oliver Cromwell was made Lord Protector there. 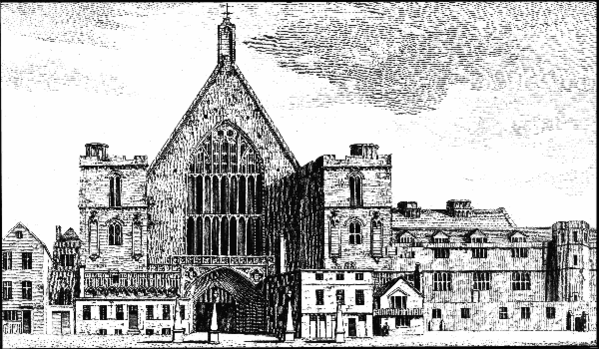 Westminster Hall, was first built by William Rufus, as an addition to the palace of Westminster, and that Prince at his return from Normandy kept the high festival of Christmas in this room, which for several reigns was used for great feasts, whenever our Kings entertained in a splendid manner the nobility and clergy: of this we find many instances; but what appears most remarkable, King Henry III. on New Year’s Day 1236, gave a public entertainment to 6000 poor men, women and children [296] in this hall and the other rooms of the palace. At length this great hall becoming very ruinous, it was rebuilt by Richard II. in the year 1397, as it at present appears, together with the buildings on the east and west sides; and it was no sooner finished than it received the appellation of the new palace, to distinguish it from the old palace, where the house of Lords and Commons at present assemble.

In the year 1399, the King kept his Christmas here, during which time 10000 persons were plentifully entertained in this spacious hall, and the other rooms of the palace; for whose supply were daily killed about eighty oxen, and three hundred sheep, besides a vast number of fowls. It is still used for our coronation feasts; and for the three great courts of justice, the chancery, king’s bench, and common pleas, besides the court of exchequer which adjoins to it.

The front of this hall is extremely narrow, it is built with stone in the gothic taste, with a tower on each side the entrance, adorned with abundance of carved work. The print represents this front. The hall itself is esteemed the largest room in Europe unsupported by pillars, it being 270 feet in length [297] and 74 broad. The roof is admired for the excellence of the workmanship, and the sides contain a number of shops belonging to booksellers, &c. It is paved with stone, and to the courts of justice at the end is an assent by a flight of steps. The inside is most remarkable for being so wide and having no columns to support a roof so large. It is a regular Gothic, and gives us a good idea of the skill in architecture of our fore fathers so early as the time of Richard II. [1]

Back to Westminster Hall (2)