Back to What Fairy-Like Music[edit]

WHAT FAIRY-LIKE MUSIC. English, Air (3/8 time). A Major. Standard tuning (fiddle). AABB. "What Fairy-Like Music" is "A Gondola Song for one or two voices" written in the early 19th century by Mrs. C. Baron Wilson (1797-1846) set to music by Joseph De Pinna. It was very popular on both sides of the Atlantic and frequently printed throughout the century. 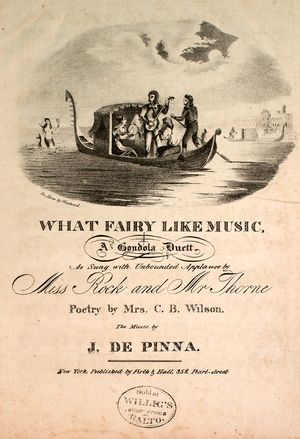 What fairy like music steals over the sea,
Entrancing the senses with charm'd melody?
'Tis the voice of the mermaid that floats o'er the main,
As she mingles her song with the gondolier's strain!

The winds are all hush'd, and thy waters at rest,
They sleep like the passions in infancy's breast,
'Till storms shall unchain them, from out their dark cave,
And break the repose of the soul and the wave.

Back to What Fairy-Like Music[edit]