Find traditional instrumental music
This is the stable version, checked on 1 November 2019.
Jump to: navigation, search

Back to Whistling Rufus

WHISTLING RUFUS. AKA and see "Way Down South in Dixie." Old Time. Bluegrass; Two-Step, March, Reel, Polka. USA; Virginia, West Virginia, Alabama, Missouri, Arkansas, Arizona. G Major {Beisswenger & McCann, Phillips}: G Major ('A' and 'B' parts) & C Major ('C' part). Standard tuning (fiddle). AB (Beisswenger & McCann, Phillips): AAB (Brody). The tune was composed in 1899 by Kerry Mills [1] (1869-1948, who also composed “Georgia Camp Meeting” and “Red Wing”), at the beginning of the ragtime era, with words later supplied by Murdoch Lind. It was described at the time of its publication as a “characteristic march” but with the addition that it “can be used effectively as a two-step, polka or cakewalk.” The first page of the original sheet music also records that: 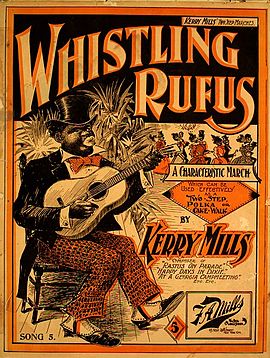 No cakewalk given in the Black Belt district of Alabama was considered worth while attending unless “Whistling Rufus” was engaged to furnish the music. Unlike other musicians, Rufus always performed alone, playing an accompaniment to his whistling on an old guitar, and it was with great pride that he called himself the “one-man band.”

Joyce Cauthen (1990) calls it a minstrel composition that passed into fiddling tradition, perhaps referring to Mill's "coon-song"[1] period cakewalk. Arizona fiddler Kenner C. Kartchner identified it as a "good two-step from around 1900" (Shumway). It was played by Rock Ridge, Alabama, fiddlers around 1920 and it appears in a list of traditional Ozarks Mountains fiddle tunes compiled by musicologist/folklorist Vance Randolph, published in 1954. It is also played as a fast breakdown by bluegrass musicians, taking a cue from Tennessee fiddler Arthur Smith's breakdown version. Kirk McGee, who recorded the song in 1927 with his brother Sam, said that they learned the song from a a man named Will Graves (Franklin, Tenn.) whose family had a singing quartet that did gospel and other songs. "We used to play that with Arthur (Smith) too, and he'd make a whistling sound by playing with the bow real close to the bridge [2] Mills' song was recorded on a cylinder record in 1899 by Vess L. Ossman, the pre-eminent banjo player of the 1890’s, nicknamed “The Banjo King.” Early 78 RPM recordings include Gid Tanner & Riley Puckett (1924), Ernest Thompson (1924), McLaughlin’s Old Time Melody Makers (1928), the Kessinger Brothers (1929) and Arkie the Arkansas Woodchopper (1941) [see Guthrie Meade, Country Music Sources, 2002], and the tune was in the repertoire of West Virginia fiddler Edden Hammons. See also related melodies “Old Parnell Reel” and “North Carolina Breakdown.”

“Whistling Rufus” was popularized in Scotland and Ireland by Scottish accordion player and dance-band leader Jimmy Shand, who recorded it in the 1950’s.

Back to Whistling Rufus