WHITE WINGS [1]. Scottish, Air and Jig (6/8 time). D Major ('A' part) & A Major ('B' part). Standard tuning (fiddle). AABB. The melody was used as the vehicle for a song [Roud No. 1753] often credited to Banks Winter entitled "White Wings." However, as Rod Stradling notes (MT CD 301-2), the provenance is inconclusive: Winter is often said to have written it in 1912, but Roud finds dates of 1882 and 1884 as well (it was published in New York by Willis Woodward & Co., 1884, with Banks Winter listed as composer, "dedicated to my friend J.P. O'Keefe). Kilgarriff, says Stradling, "gives Banks Winter, but 1870 as the year, and adds: 'Some say that Banks Winter did not in fact write this song but purchased it from singer Joseph Gulick for $20'." The song has also been credited to Ciro Pinsuti (1829-1888). The website "The Contemplator" seems to associate "White Wings" with a popular novel of the same name written by William Black in the 1880's. 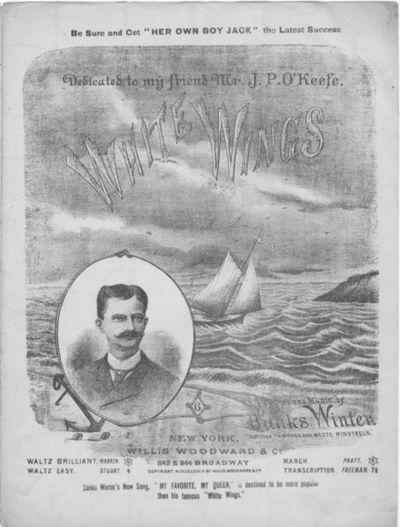 Sail! home, as straight as an arrow,
My yacht shoots along on the crest of the sea;
Sail! home, to sweet Maggie Darrow,
In her dear little home,
She is waiting for me.

Stradling also finds that the song was once official song of the YWCA, the Young Women's Christian Association, and that it was performed by Minstrel troupes and on Music Hall stages. Banks Winter himself was a member of the Primrose and West Troupe, where he sang his own compositions. The Green Book Magazine (1909, p. 758) recorded:

"White Wings," which not only made him famous, but a fortune besides. Winter was one of the best ballad singers of his day, possessed of a commanding presence and a strong, fresh, resonant tenor voice. He never failed to receive rounds of applause. He is now retired from the minstrel business and is managing the career of his talented daughter, Winona Winter, who is fast becoming one of the most delightful comediennes in musical comedy.