Find traditional instrumental music
This is the stable version, checked on 27 September 2019.
Jump to: navigation, search

Back to Whitney's Farewell

WHITNEY'S FAREWELL. AKA - "Russel's Farewell." English, Country Dance Tune (6/4 time). F Major. Standard tuning (fiddle). AB. The melody with directions for a country dance first appeared in London publisher Henry Playford's Dancing Master, 9th edition (1695, p. 163). It was retained in the long-running Dancing Master series through the 18th and last edition of 1728 (then published by John Young, heir to the Playford publishing concerns). It was also published by rival music publisher John Walsh in his Compleat Country Dancing Master, editions of 1719, 1731 and 1754, and in his Compleat Country Dancing Master, Volume the Fourth (London, c. 1740). The tune can be found in Wright's Compleat Collection of Celebrated Country Dances, Vol. 2 (London, 1742), a re-publishing by John Johnson of an earlier work by Daniel Wright.

The tune is associated with ballads going by various titles "Captain Whitney's Farewell," "The Notorious Robber's Lamentation," "Captain Johnson's Last Farewell," "Stout Whitney Lies in hold," and "Capt. WHITNEY's Confession: OR, HIS Penitent Lamentation, Under a Sence of a Guilty Conscience, on the Day of his Execution at the Porter's Block, near Smithfield-Bars, which was on the First of February, 1693." All are of a type with words of regret, rue of past misdeeds, and admonition not to follow the path he chose. James Whitney [1] was a publican-turned-highwayman, who garnered a reputation for his exploits and bravado. He was eventually caught, tried and hanged at Smithfield in 1694. 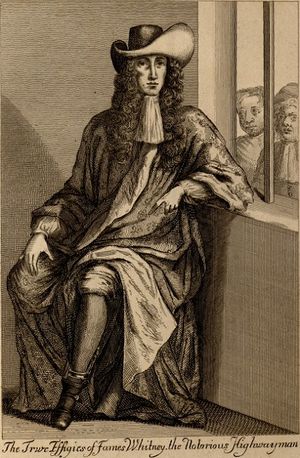 The fatal day is come at last,
of sorrow, grief, and shame,
Which will the fading glory blast,
of Whitney now by name.
My wicked life has been the cause
of this sad destiny;
For since I broke the Nation's laws,
'tis just that I should die.

Back to Whitney's Farewell