Back to Wide Awake Reel[edit]

WIDE AWAKE REEL. AKA and see "Young Arthur Daly." Irish? American, Reel. A Major. Standard tuning (fiddle). AABB. There was a clipper ship named "Wide Awake", recorded in American Clipper Ships 1833-1858 by Howe and Matthews, a fact probably coincidental with the tune title. More likely is that the title is associated with the 'Wide Awakes' [1], an American paramilitary organization affilliated with the Republican Party in the election of 1860 (in which Abraham Lincoln was elected). 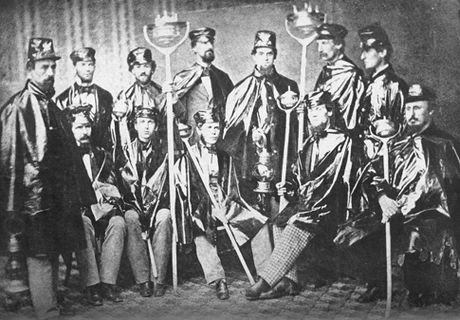 An 1860 photograph of the original Wide Awake club, Hartford Conn.

Back to Wide Awake Reel[edit]