Back to William Gibson Craig M.P.[edit]

WILLIAM GIBSON CRAIG, M.P. Scottish, Strathspey. E Flat Major. Standard tuning (fiddle). AAB. Composed by William Marshall (1748-1833). William Gibson Craig [1] (1797-1878) was a Member of Parliament for Midlothian from 1837-1841 and for Edinburgh, 1841-1852. He was Lord Clerk Register and Keeper of the Signet from 1862 until his death. He was made a Privy Counsellor in 1863. Since the dates of his election to Parliament are after Marshall’s death, it may be that the “M.P.” initials were added by the publisher of his posthumous 1845 collection, Alexander Robertson of Edinburgh, who purchased Marshall’s copyright. 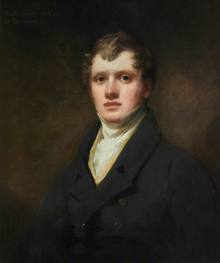 In 1837 advocate Craig was judged by The Times to have been an ‘unparalleled failure’ as an M.P., his disgrace heightened both by his ‘ostentatious display of written preparation’ and the ‘gaiety of his court dress’.

Back to William Gibson Craig M.P.[edit]