Willy of the Dale

Back to Willy of the Dale[edit]

WILLY OF THE DALE. English, Air (6/8 time). G Major. Standard tuning (fiddle). One part. “Willy of the Dale” is an English song composed in the late 18th century (attributed to “Mr. Hook” on an American song-sheet). The song "Willy of the Dale" was written by James Hook (1746-1827) The melody is somewhat irregular, having a total of 20 measures rather than the usual sixteen. It appears in various songsters and single-sheet publications in both Britain and America. This stanza begins the song in The Skylark, an English publication of 1797: 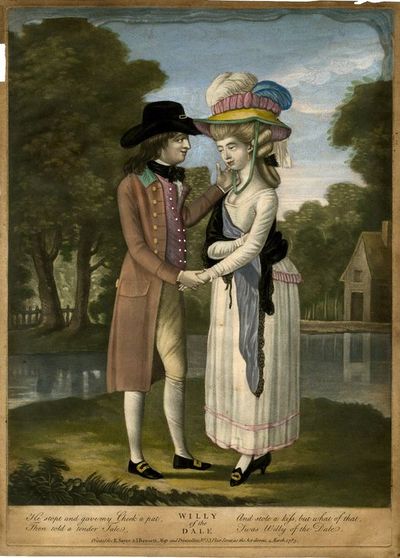 When Spring, dispensing sweets around,
In gayest liv'ry deck'd the ground;
Just when the fragrant breath of morn
Had shook the dew-drops from the thorn;
To yonder mead my flock I led,
And gayly caroll'd as they fed.
Of all the swains who trip the green,
Or pipe in yonder vale,
None look so neat, or pipe so sweet,
As Willy of the Dale.

Back to Willy of the Dale[edit]