Find traditional instrumental music
This is the stable version, checked on 29 September 2021.
Jump to: navigation, search 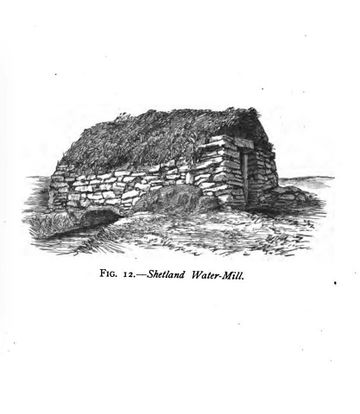 It was one winter in 1803 that Gibbie Laurenson, living at Norderhoos, Gruting, set out with a mare's load of dried corn for grinding at the Fir Vaa water mill. After he had filled the hopper and started the mill, he lit a peat fire in a fire kettle and sat down on a stool to rest. Aware of voices outside, Gibbie pretended to be asleep as he knew then that the trows were about. The door opened and a troop of peerie folk came in. A woman took off the nappie from her baby and hung it on Gibbie's leg, near the fire, to dry. Then one of the trows said, "What'll we do ta da sleeper?" "Lat him aleen," replied the woman, "he's no a ill body. Tell Shanko ti gie him a ton." Said Shanko, "A ton he sall hae, an we'll drink his blaand." After drinking, they trooped out of the mill, and danced on the green nearby. When the footfalls and music ceased, Gibbie looked out from the mill door and saw the trows going up the hill towards Stackaberg, and a boat with two rowers pulling away from the shore. He concluded that this had landed his visitors.

Gibbie's fiddler son, to whom he whistled the tune, called it "Faider's Tön" (Father's Tune), but it was later named "Winyadepla" after a loch near the Fir Vaa watermill.

The family tale was related to an interviewer by James John "Jeemsie" Laurenson, who was born on the isle of Fetlar in 1899. “Jeemsie” lived nearly all his life on a farm (croft) in Aith, Fetlar, the second of nine siblings, and was well known for his tales and his great sense of humor, and often told stories of the trows in Fetlar. It was his great- grandfather, Gibbie Laurenson who actually encountered the trows in the mill of Firva. As Jeemsie related the story, Gibbie would go to the water mill at Firva (on the east side of Fetlar) to grind corn. The farmfolk would take their leisure while the mill did its work by sitting on the straw, which Gibbie did, whilst taking snuff. He was nodding off when when he heard music outside. "The Picts were in the habit of stealing boats and slipping them [letting them go] once they were finished with them, and he knew the peerie [small] folk had landed and were coming to the mill. The trows came in and decided not to interfere with Gilbert but played him a tune on their horse hair-fiddle. He had a great ear for music and when he came home he whistled the tune to his son"[1].

See also listing at :
Hear Jeemsie Laurenson's (1899-1983) recorded Winyadepla story at Tobar an Dualchais [1] and Shetland FirWirds [2], a site devoted to the Shetland dialect (which is quite thick in Jeemsie's case). Jeemsie 'diddle's' (mouthmusic) the tune at -1:18 of the recording.