Find traditional instrumental music
This is the stable version, checked on 27 March 2021.
Jump to: navigation, search 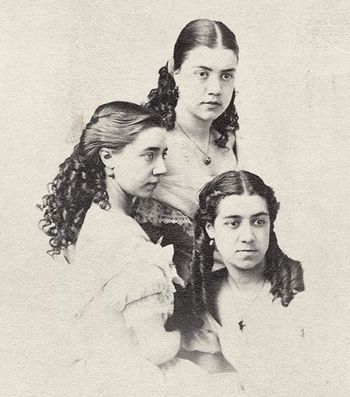 Jennie, Sophie, and Irene Worrell.
WORRELL'S HORNPIPE. American, Hornpipe (2/4 time). B Flat Major. Standard tuning (fiddle). AABB. The title perhaps refers to William Worrell and/or his three daughters, Sophie, Irene and Jennie, who performed in their youth with their father and later as an act on their own. Worrell (1823-1897) was a successful circus clown who developed a stage act with his daughters, first performed in San Francisco and then, toured throughout the United States. A few years later they toured Australia with their father, returning to San Francisco. In 1867 the Worrells advertised "ballads, duets, single and duo dances, jigs, reels, and hornpipes" in addition to banjo solos. They brought the act to New York City in 1866 when Jennie was 16 years old (recording her age as 14), Irene was around 18, and Sophie approximately 20. Given their notoriety and extensive background in the theater, the sisters leased the Church of the Messiah building at Broadway and Waverly Place, recently converted to a legitimate theater and renamed it the Worrell Sister’s New York Theater. Together the women managed the space and produced the plays, while also directing and acting in many of the productions[1].

The Worrell sisters were the only dancing rivals to the greatest female performer of the era, Lotta Crabtree. They performed in clog-dancing shoes, but their reputation took a hit when it was later discovered that Jennie Worrell's clogs had trick heels (heels that were hollowed out with tin-lined boxes placed inside and holding two bullets), that made it sound like she was dancing faster than she really was.

Jennie, the star performer, eventually became dissolute, which led to financial ruin and a destitute lifestyle. She died alone in the Coney Island marshes where she had wandered in search of a place to sleep. A fire started, perhaps from a match or cigarette, and she perished in the wildfire in August, 1899.