Yearlings in the Canebrake

Find traditional instrumental music
This is the stable version, checked on 6 June 2020.
Jump to: navigation, search

Back to Yearlings in the Canebrake

YEARLINGS IN THE CANEBRAKE. AKA - "Yearlings in the Canebreak." American, Reel (cut time). A Dorian ('A' part) & A Major ('B' part). Standard tuning (fiddle). AABB'. The tune is known as a Southwest melody. It was recorded in the 78 RPM era by Captain M.J. Bonner [1] (“The Texas Fiddler”), a Confederate Army veteran who recorded at the age of 78 in 1925. Bonner was born March 1, 1847, in Franklin County, Alabama, and his family migrated to Texas around 1854. He was the most accomplished old-time musician to play on the first radio station ‘barn dance’ broadcast on WBAP out of Fort Worth, Texas, on Jan. 24th, 1923. His "Yearlings in the Canebrake" (as the title appears on the label) is an engertic modal breakdown from an accomplished fiddler, and his recordings resonate well in the modern era. 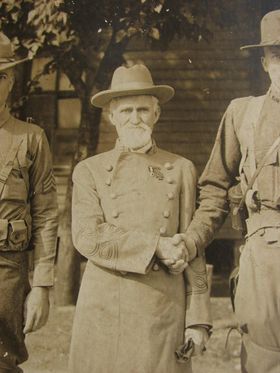 Canebrake is dense thickets of cane with edible shoots, found all over the American South (save for the mountainous regions), but particularly in the Mississippi watershed. Canebrake made for good livestock feed, but the ecosystem was sensitive to overgrazing. Horses fed cane were said to be able to work as well as those fed corn[1]. Some thickets were so dense that they were a supplement to fencing in pioneers days. Theodore Roosevelt went on a bear hunt in the Louisiana canebrake in 1908 and described it:

The canebrakes stretch along the slight rises of ground, often extending for miles, forming one of the most striking and interesting features of the country. They choke out other growths, the feathery, graceful canes standing in ranks, tall, slender, serried, each but a few inches from his brother, and springing to a height of fifteen or twenty feet. They look like bamboos; they are well-nigh impenetrable to a man on horseback; even on foot they make difficult walking unless free use is made of the heavy bush-knife. It is impossible to see through them for more than fifteen or twenty paces and often for not half that distance. Bears make their lairs in them, and they are the refuge for hunted things. 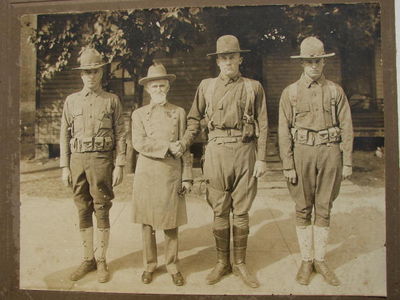 Bonner and his sons during World War I

Back to Yearlings in the Canebrake