Back to Yellow Rose of Texas[edit]

YELLOW ROSE OF TEXAS. AKA - "Red Rose of Texas." Old Time, Song and Breakdown. USA, southwestern Va., western North Carolina. D Major. Standard or ADae (Tommy Jarrell) tunings (fiddle). One part (Sweet): AABB (Phillips). The song "The Yellow Rose of Texas" originally was a minstrel composition by a composer known only as "J.K." It became popular during the Civil War and passed into Southern fiddling tradition. "Folk-processing" of the song sometimes resulted in the woman referred to as the 'yellow rose' in the lyrics being called a 'red rose', but clearly a female person-of-color was meant for the minstrel version (which also refers to the woman as 'this darkey'). Some sources name the ‘yellow rose’ as one Emily Morgan, a slave girl who hailed from North Carolina, as the woman who seduced the Mexican General Santa Anna just before the battle of San Jacinto, making Sam Houston's victory possible while Santa Anna was thus distracted. 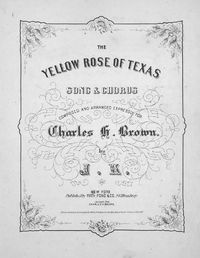 There's a yellow rose in Texas that I am going to see,
No other fellow knows her, no other one but me.
She cried so when I left her that it like to broke my heart,
And if I ever find her, we never more will part.
Now I'm going to find her for my heart is full of woe,
We'll sing the songs together we sung so long ago,
When I get back to Austin how happy I will be,
With the yellow rose of Texas a sitting on my knee. .... (NLCR)

Recorded as a song, Gene Autry’s version became one of the Depression era’s best-selling records.

It has been claimed (tongue-in-cheek) that much of Emily Dickinson’s poetry can be sung to the song “Yellow Rose of Texas.”

Back to Yellow Rose of Texas[edit]