YEW TREE [1], THE. Irish, Air (3/4 time). A Minor. Standard tuning (fiddle). AB. The oak, the ash, the yew, and the hazel were, in particular, held as sacred and central to spiritual practice by the Druids. There is considerable folklore (and 'fakelore') about the yew tree, although a schloarly article, by Carole M. Cusack of the University of Sydney called "Scotland's Sacred Tree: The Fortingall Yew" [1] (about one of Europe's oldest trees) seems to contain more reliable information than many sources. 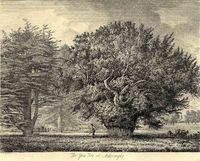 Source for notated version: "Copied from a Munster MS. lent me by the late John O'Daly, the Irish publisher of Anglesea St., Dublin".