YOUNG COLLIN. AKA - "Young Colin was the bonniest swain." Scottish, Air (whole time). D Major. Standard tuning (fiddle). One part. The song, beginning "Young Collin was the bonniest swain," was published in London in Henry Roberts' Clio and Euterpe, or British Harmony, vol. 3 (1762, p. 192), and John Sadler's The Muses Delight (1754, p. 97). It was sung at Vauxhall by Miss Burchall, born Isabella Burchell (1735-1802) in Surrey in 1735. She was 'discovered', as the Hollywood-esque story goes, when a young girl working as a milkmaid at Denbies, the estate of Jonathan Tyers, the developer of the fashionable pleasure garden of Vauxhall. He overheard her singing as she drew milk from the cows and was captivated by her untutored voice. He took her under his wing and made sure she had a brief formal tutelage in vocal training, and introduced her to the stage at Vauxhall Gardens at age 16, singing "Young Colin was the bonniest Swain." She worked at Vauxhall for nine years and was widely acclaimed, then turned to the London stage. Her second husband was Capt. John Mills of the East India Company, a survivor of the Black Hole of Calcutta. 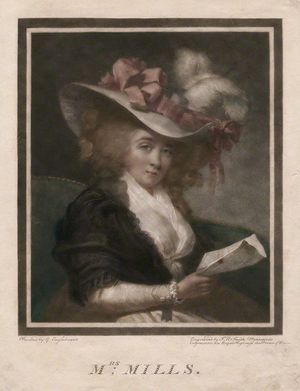