Back to Young Tom Ennis[edit]

The Chicago Irish Music Club, around 1903. Tom Ennis is the boy seated in the center of the picture.

YOUNG TOM ENNIS (Tomás Og Magennis/Mac Aengusa). AKA and see "Banshee that Wailed over the Mangle Pit (The)," "Banshee's Wail Over the Mangle Pit (The)." Irish, Double Jig. A Dorian. Standard tuning (fiddle). AABB. Tom Ennis was indeed the youngest member of Chicago’s Irish Fiddle Club in the early years of the 20th century. A budding piper and fiddler, he was the American-born son of piper and flute player John Ennis of Kildare, from whom O’Neill obtained this tune. When Tom reached maturity he moved to New York where he made a living as a professional piper and founded one of the first Irish-American recording companies, for whom he commercially recorded in the 1910’s and 20’s (Carolan, 1997). Ennis died of a heart attack in Jonesville, Michigan, while on tour. See “Banshee's Wail Over the Mangle Pit (The)” for a transposed version of this tune, and see also the related “Kilkenny Jig (The).” 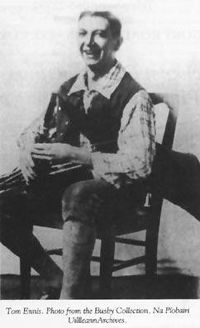 Back to Young Tom Ennis[edit]