Your Blue Eyes Drive Me Crazy

Back to Your Blue Eyes Drive Me Crazy[edit] 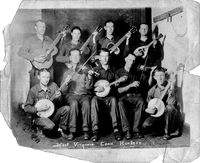 The Coon Hunters only recorded two sides for Victor (the other was "Greasy String (3)"), and the band, which at times numbered nine members, was not called back by the recording company for another session. Soon after their 1927 recording one of the fiddlers, Wesley "Bane" Boyles, was convicted of moonshining and sent to prison, but the group seems to have continued without him as a local act. When released, Boyles worked at a variety of jobs and continued to play music in the area until his death in 1975. 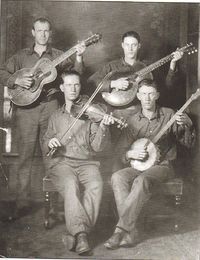 
See also listing at:
Hear the West Virginia Coon Hunters' 1927 recording on youtube.com [2]
See the very interesting blog about W.B. Boyle and the Coon Hunters by his granddaughter, Denise Smith [3]

Back to Your Blue Eyes Drive Me Crazy[edit]