Back to Zack Wheat's Piece[edit]

ZACK WHEAT’S PIECE. Old Time, Breakdown. USA, Missouri. D Major. Standard or ADae tuning (fiddle). AABB. “Zack Wheat’s Piece” is one of the ‘100 essential Missouri fiddle tunes’ according to Missouri fiddler Charlie Walden. According to Christeson (1973) the fiddler named in the title, Zack Wheat, was an earlier musician of some renown who lived near Argyle, Missouri. The melody has become popular among Missouri fiddlers. 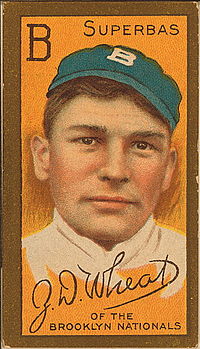 There was a baseball player named Zack Wheat [1] whose career spanned the years 1909 to 1927. He was born in the north Missouri town of Hamilton in 1888 to a man of English descent and a mother who was a full-blood Cherokee. Wheat played primarily for the Brooklyn Dodgers and was proficient enough to have been elected to the Hall of Fame in 1959. His batting was prodigious: he won the National League batting title in 1918 (.335) and batted over .300 a total of fourteen times compiling a lifetime average of .317. It is unknown whether there is any connection between the ballplayer and the tune, however, there is a small state park dedicated to Zack Wheat (the ballplayer) in the Camden/Morgan County area of Missouri, not far from Osage County, Missouri, where the town of Argyle (the home of Christeson’s fiddler) is located. Whether or not there was any association with the baseball player is unknown.

Back to Zack Wheat's Piece[edit]