Find traditional instrumental music
This is the stable version, checked on 26 February 2021.
Jump to: navigation, search

BILL DRIVER (1884-1987). William "Bill" Driver was born in Eldridge, Laclede County, Missouri and later relocated to Miller County, central Missouri, southwest of Iberia, where he spent most of his fiddling career. Collector R.P. Christeson first met him in 1928 at one of the annual encampments at Iberia, first organized to support Civil War veterans. Driver played for the dance at the encampment and had a large repertory of breakdowns ideal for square dances. Christeson recalled: "This was one of the sections of Missouri where both men and women would often jig dance throughout the figures. This required steady, peppy fiddle music, which Bill could provide in abundance. He won many local fiddling contests but was never sponsored for any of the state contests. On one occasion, local townspeople arranged for him to play a program over WOS radio station at Jefferson City. This one appearance brought mail from listeners in several states and Canada"[1]

Bill Driver had the unique, God-given talent of a musician. He was very well-learned on the old country fiddle and during his lifetime he won many fiddling contests across the countryside. Often his first-place prize was $25.00 in cash. He was much in demand at Saturday night dances where he played to the delight of his many admirers. Many times he was accompanied by the Howser sisters (Sadie and Slvia) as they picked their flat-top guitars for the lively dances. Bill and the Howsers (including Sadie and Sylvia's blind brother) often played at the local picnics held each summer at Hardy Lollis Park in Iberia. 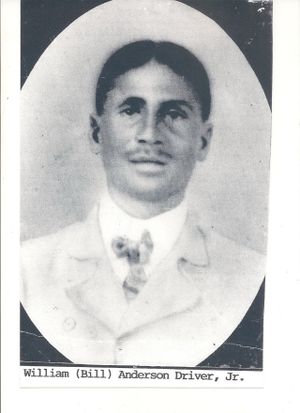 A gifted musician, he had a keen ear, kept steady time, and played vigorously. He was born at Eldridge in Laclede County, but I first heard him play in Iberia Miller County, in the late 1920's. My first recordings of Bill are from 1948 [many lost in a robbery]...Bill's was the best example of a strictly indigenous repertory that I know of; whereas Boone County fiddlers, for example, had their repertoires diluted with hornpipes, jigs and reels that came in via the phonograph, mail-order sheet music, or itinerant fiddlers, Bill stuck with the music and style of his locale. Although he won many local contests, he was never sponsored to appear in any that were statewide. He did play over WOS in Jefferson City once, and this appearance alone brought him mail from listeners in several states and Canada.