HOWE, ELIAS, born in Framingham in 1820, is one of the oldest living music-publishers in the United States, having issued his first music-book over fifty-one years ago [1841].

His parents were in humble circumstances and he early went to work. His first outside work was riding a neighbor's horse during ploughing, for the munificent remuneration of two cents a day. As a boy he was naturally musical, and, having obtained an apology for a violin, used to spend his spare hours fiddling the old tunes then popular. At that time there were few or no collections of music that could be bought, as it was only published singly or in sheet-music form, and sold at a high price per sheet; and as it was beyond his means to have a collection of printed music, he was in the habit of copying in a blank book every tune he heard played or could get hold of. In this way, in the course of time, he had gathered a large collection of music in his book, and it was in great demand by all the musicians the country round, who used frequently to borrow it to use at dances.

Early in 1840, when nineteen years old and working on a farm, it occurred to him that he might make some money if he could but get his book published. Accordingly, obtaining from his employer a few days' leave of absence, he came up to Boston to try his fortune here. Submitting his manuscript to Albert J. Wright, of the firm of music printers Wright & Kidder, then doing business in Cornhill, he was told that it would cost five hundred dollars to issue the first edition of a few hundred copies. Asked if he had any friends in Boston or at home who could help him with funds, he replied that he had none with money, but that he would " work his legs off to make the book a success, if they would only print it for him."

Finally Wright & Kidder agreed to make the plates and print the books at their own expense, allowing him to take the copies as fast as he was able to pay for them. The book thus published was "The Musician's Companion," and afterwards, when issued in three volumes, it ran through many editions, and an immense number were sold. Mr. Howe bought his first small stock from his publishers in borrowed money, and soon accumulated a little capital by peddling his books from door to door.

From this beginning sprang the immense number of music books at a popular price which are published in the United States. In 1842 Mr. Howe opened his first store in Providence, R.I., at No. 98 Westminster street. Here he carried on a small music-business, besides repairing accordeons and umbrellas, until 1843, when he sold out.

Afterwards, moving back to Boston, he published " Howe's Accordeon Preceptor," with an entirely original system of instruction, which soon reached the sale of one hundred thousand.

This was followed by "Howe's Violin School," the first of the cheap, selfmastering books, containing a large collection of graded popular music, of which over five hundred thousand copies have been sold.

Mr. Howe's first store in Boston was in the old Scollay Building, where he was associated with Henry Tolman, the only partner in business he ever had. Afterwards he successively occupied Nos. 5, 9, and 11 Cornhill.

About 1850 he sold out his entire business to Oliver Ditson and retired, buying the large estate in South Framingham of Seth B. Howes of circus fame. There he lived quietly, meanwhile acting as manager of the South Reading Ice Company several years, until about 1861, when he again entered his old business. Establishing himself at No. 33 Court street, moving from there to No. 61 Cornhill, and then to No. 103 Court street, he began making drums, and during the early years of the war he sold drums and fifes to nearly all the Massachusetts regiments and to many of the Western States. 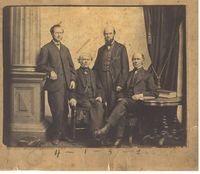 He also published music, especially military band and drum and fife, for use in the armies. Much of this music was sent to Louisville, Ky., and after the war he was informed that it all went into the Confederate army and was played there. Since the war days Mr. Howe has continued publishing music, steadily enlarging his catalogue and issuing many notable books. His series of instruction books for all instruments, still popular, have reached a sale of over a million copies.

About twelve years ago [1880] he moved to his present warerooms, Nos. 88 and 90 Court street. In 1871, foreseeing the present great popularity of violins, he determined to have his choice in old violins before they had been picked over; and with this in view he made his first trip to Europe. Since that time he has made many trips abroad. scouring the Continent for bargains in old and new violins, violas, violoncellos, and double basses, rare and curious instruments, and now he has the largest and finest collection of old violins in the world.