Find traditional instrumental music
This is the stable version, checked on 3 September 2019.
Jump to: navigation, search

Emery Bailey (1896-1960) was a fiddler from Shock, Calhoun County, West Virginia, whose name is sometimes given as 'Emory'. Fiddler Paul Kirk notes that the spelling on his gravestone is 'Emery', however. He was one of twelve children born to Winfield Bailey and Elizabeth Hicks, and married Blanche Goodrich on April 30, 1922. They had eleven children and Blanche (1903-2000) outlived him by forty years. One of researcher Brandon Ray Kirk's informants, a man named Brooks Hardway, knew Bailey and compared him to the regional fiddle powerhouse Ed Haley: "[Emery] wasn't as good as Ed Haley by no means. Ed Haley was far ahead of everybody at that day and time. But Emery Bailey was one among the best of the fiddlers in Calhoun-Braxton-Clay-Gilmer Counties...Old Sol Carpenter's favorite was Emery Baily. He was fifty years ahed of his time"[1]. 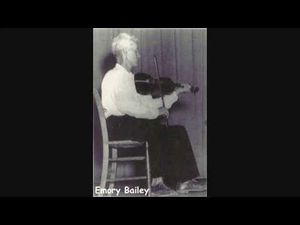 Gerry Milnes also interviewed Hardway for his book Play of a Fiddle, eliciting this memory of a fiddle contest:

Emery Bailey was fifty years ahead of his time in what he could do with a bow on a fiddle. They had a contest at Sutton one time, old-time fiddler's contest, and Emery went...When Emery come back, I asked him, "What did you do in the contest?"
Emery said, "Upon my honor, Brooks, they didn't let me play." He said, "They wouldn't let me enter the contest."
I said, "Did you play a tune or two for 'em Emery?"
Emery sai, "Yea."
I said, "What did you play?"
He said, "Upon my honor, I fiddled 'Sally Gooden', Brooks." I said, "Whey didn't they let you play?"
He said, "They couldn't call my way old-time fiddlin'."
I said, "What was wrong?"
He said, "I think I's a-puttin' too much diddle on the bow." Now, Emery's a-layin' the leather to "Sally Goodin." I'd give anything on earth if I had a tape of that tune that he played that day."[2]