John Crerar was a contemporary and pupil of Niel Gow and gamekeeper to the 4th Duke of Atholl. William Scrope wrote of him in the preface to his book The art of deer-stalking (1839):

Mr. John Crerar entered the Duke of Atholl's service in 1776. He was an honest, faithful, and most attached adherent, of astonishingly active powers, and possessed of admirable skill in stalking and shooting the deer; always selecting the finest harts. He was also a composer of music, and many a dance have the lads and lasses had to the sound of my old friend's violin. He is universally beloved, and now resides on his pension at Pulney Lochside. The members of the Curling Club of Dunkeld lately presented him with a silver quaich upon the occasion of his attaining his ninetieth year, and as a token of their affection for him, and their admiration of the skill and ardour which he so long displayed in all manly games. Robert Crerar, one of his sons, is a wine-merchant in Swallow-street, and his cellars rejoice in the best Scotch whiskey. Charlie Crerar, another of his sons, is now head forester in Atholl. 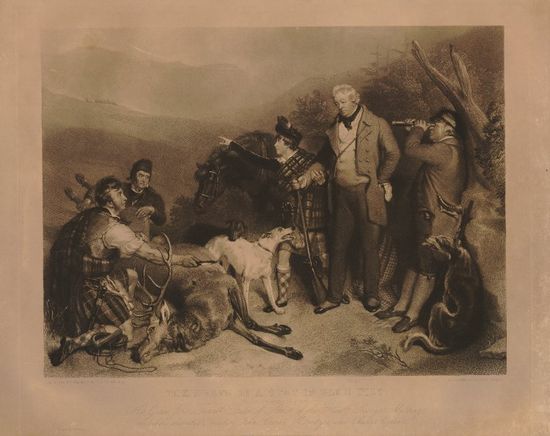 Death of a Stag by Edwin Landseer. Both John and his son Charles are depicted in the group.

Crerar is pictured in several paintings by Edwin Landseer, including The Death of a Stag at Glen Tilt and The Keeper John Crerar with his Pony. Landseer met him at Blair Atholl during his first visit to Scotland in 1824. See also his compositions "Marquis of Tullibardine (The)," "Duke of Athol's Forest Lodge--Glen Tilt," "Banks of Garry (The)," "Big Boat o' Inver (The)," and "Bridge of Garry (The)."

Retrieved from "https://tunearch.org/w/index.php?title=Biography:John_Crerar&oldid=323344"
Category:
Cookies help us deliver our services. By using The Traditional Tune Archive services, you agree to our use of cookies.