The manuscript referred to here was transcribed by the fiddle player, Laurence (or ‘Larry’) Smyth (1866-1930). Smyth was reared in Killasona, Granard, County Longford, a region of north Longford where Irish folk music was very vibrant during the 19th and early 20th centuries. In terms of fiddle music, Thomas ‘Blind’ Kiernan (c.1807-1887) of Cartron, Drumlish, Co. Longford is largely responsible for introducing this music to the rural classes of north Longford. A number of his students also became full-time teachers, and consequently, a rapid growth of fiddle music occurred in this region between c.1860-c.1910. One of these teachers was Kiernan’s nephew, Bernard Rogers (1856-1907), of Oghill, Killoe, Co. Longford. In local lore it was held that Kiernan was a strict teacher, and used to cut the hands off Rogers when he was teaching him the fiddle. Rogers followed in the footsteps of his uncle becoming a full-time fiddle teacher in the area.

Kiernan, and successive generations of his students such as, Rogers, taught the fiddle through literal transmission [Kiernan was only partially blind]. As a result of this teaching method, several manuscript collections have been discovered across the region of north Longford transcribed by fiddle players with links to Kiernan’s teaching. One of these particular collections is the Larry Smyth Manuscript. According to Seán Smyth, his father, Larry, the scribe of the manuscript, was taught the fiddle by the aforementioned Bernard Rogers. However, in the manuscript Larry wrote in numerous places the phrases, ‘Music by Kiernan’, and, ‘Kiernan’s Music’, which appears to have been his way of indicating that the music he was transcribing derived originally from Rogers’ teacher, Kiernan.

In all, the manuscript contains 124 music items, which are categorised as 123 tunes and 1 exercise. Variants of the latter exercise entitled, ‘Preludes by Kiernan’, can also be found in other manuscripts from the north Longford region, suggesting that preludes were Kiernan’s method for teaching the fundamentals of scale theory. The majority of the 123 tunes appear to have been derived from Kiernan’s teaching. For instance, Smyth entitled three tunes in the manuscript as ‘Kiernan’s Jig’, ‘Kiernan’s Reel’ and ‘Kiernan’s Hornpipe’. Nonetheless, approximately 10 tunes were copied from printed material such as, R.M. Levey’s First Collection of the Dance Music of Ireland, (London, 1858), Kerr’s Merry Melodies Vol.1, (Glasgow, c.1870s) and Francis Roche’s Collection of Irish Traditional Music, (Dublin, 1912). These particular tunes are located towards the end of the manuscript, and may have been added a later date to the other transcribed repertoire.

There are no dates in the manuscript. Based on Smyth’s chronological details and tunes with verifiable dates, it has been established that Smyth transcribed the manuscript sometime around the turn of the 20th century. During this particular time he was living in Ranaghan, Abbeylara, Co. Longford, not far from his ancestral home place in Granard. Therefore, it’s likely that he wrote the manuscript while living in Abbeylara. Aside from the tunes sourced from printed material, the repertoire of the Larry Smyth MS is, by and large, indicative of the folk music that was played by rural musicians in north Longford during Smyth’s era. 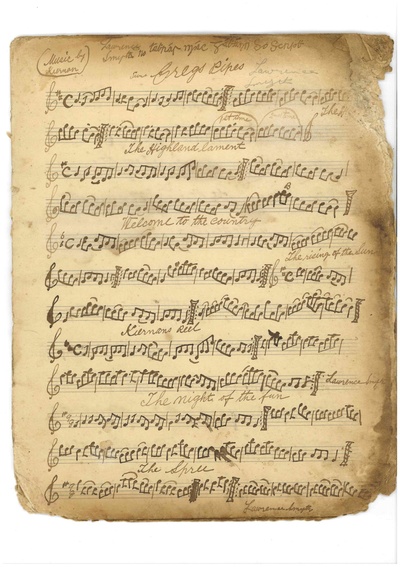