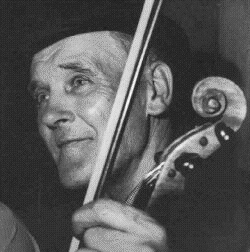 ALTHOUGH now an iconic figure of Donegal fiddle music, as a musician John Doherty was very much an individualist. But more than any other musician, he did draw attention to that county’s distinctive fiddle style.
The musical lineage of the Doherty and McConnell families goes back many generations of Travellers that alternated between settled and life on the road, and includes Turloch MacSweeney, ‘An Piobaire Mor’. Johnny Doherty’s grandfather Simon played the fiddle, uilleann pipes and highland pipes. John Doherty was born in Ardara, Co Donegal around 1895. His father Mickey Doherty, played fiddle. He married the singer Mary McConnell, also from a musical family – her brothers, Mickey and Alec, were well-known fiddle players and made tin fiddle makers – and they had nine children, six of whom played the fiddle. John was the youngest on the boys. His brothers Mickey and Simon and his nephew, also Simon, were fiddle players.
He once told Padraig O Baoighill during a Gael-linn recording session in the 1970s that he started to play the fiddle in his teens, and that he practised out in the barn . He said that he had to return to that barn again and again until his father was pleased with his playing of Bonny Kate. Although he greatly admired the Scottish fiddler and composer James Scott Skinner (1843-1927) whose recordings he had heard, according to his niece, Frances Rohleder of Ballyshannon, Co Donegal, John’s favourite fiddler has always been his own father. Brother Mickey Doherty, on the other hand, was influenced by the Sligo style of Michael Coleman.