Tragedy of Sir James the Rose 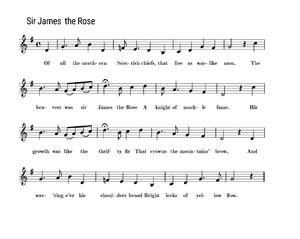 Of all the Scottish northern chiefs, Of high and mighty name, The bravest was Sir James the Rose, A knight of meikle fame.

His growth was like a youthful oak That crowns the mountain's brow; And waving o'er his shoulders broad, His locks of yellow flew.

Wide were his fields, his herds were large, And large his flocks of sheep; And numerous were his goats and deer Upon the mountain steep.

The chieftain of the good clan Rose, A firm and warlike band, Five hundred warriors drew the sword Beneath his high command.

In bloody fight thrice had he stood Against the English keen, Ere two and twenty op'ning springs The blooming youth had seen.

The fair Matilda dear he loved, A maid of beauty rare; E'en Margaret on the Scottish throne Was never half so fair.

Long had he woo'd, long she refus'd, With seeming scorn and pride, Yet oft her eyes confessed the love Her fearful words denied.

At length she blessed his well-tried love, Allowed his tender claim; She vowed to him her virgin heart, And owned an equal flame.

Her father, Buchan's cruel lord, Their passion disapproved; He bade her wed Sir John the Graham, And leave the youth she loved.

One night they met, as they were wont, Deep in a shady wood, Where on the bank, beside the burn, A blooming saugh tree stood.

Concealed among the underwood, The crafty Donald lay; The brother of Sir John the Graham, To hear what they might say.

When thus the maid began: my sire, Your passion disapproves? He bids me wed Sir John the Graham, So here must end our loves.

My father's will must be obey'd, Naught boots me to withstand; Some fairer maid in beauty's bloom Must bless thee with her hand.

Soon will Matilda be forgot, And from thy mind effaced, But may that happiness be thine Which I can never taste.

What do I hear? Is this the vow? Sir James the Rose replied; And will Matilda wed the Graham, Though sworn to be my bride?

His sword will sooner pierce my heart Than reave me of thy charms, And clasped her to his throbbing breast, Fast locked within his arms.

I spoke to try thy love, she said, I'll ne'er wed man but thee; My grave shall be my bridal bed Ere Graham my husband be.

Take then, dear youth, this faithful kiss, In witness of my troth, And every plague become my lot That day I break my oath!

Soon turned about the fearless chief, And soon his sword he drew, For Donald's blade before his breast Had pierced his tartan through.

This for my brother's slighted love, His wrongs sit on my arm; Three paces back the youth retired, And saved himself from harm.

Returning swift, his sword he reared Fierce Donald's head above, And thro' the brain and crashing bones The sharp-edged weapon drove.

He staggering reeled, then tumbled down A lump of lifeless clay; So fall my foes! Quoth valiant Rose, And stately strode away.

Thro' the green wood in haste he passed Unto Lord Buchan's hall; Beneath Matilda's window stood, And thus on her did call.

Art thou asleep, Matilda, dear, Awake, my love, awake! Behold thy lover waits without, A long farewell to take.

For I have slain fierce Donald Graham, His blood is on my sword, And distant are my faithful men, Nor can defend their lord.

To Skye I will direct my flight, Where my brave brothers bide, And raise the mighty of the Isles To combat on my side.

Oh, do not so, the maid replied, With me till morning stay, For dark and dreary is the night, And dangerous the way.

All night I'll watch thee in the park, My faithful page I'll send In haste to raise the brave clan Rose, Their master to defend.

He laid him down beneath a bush, And wrapped him in his plaid : While, trembling for her lover's fate, At a distance stood the maid.

Swift ran the page o'er hill and dale, Till, in a lonely glen, He met the furious Sir John Graham, With twenty of his men.

Where go'st thou, little page, he said, So late? Who did thee send ? I go to raise the brave clan Rose, Their master to defend;

For he has slain Sir Donald Graham, His blood is on his sword, And far, far distant are his men, That should assist their lord.

And has he slain my brother dear, The furious chief replies; Dishonour blast my name, but he By me ere morning dies.

Say, page, where is Sir James the Rose? I will thee well reward; He sleeps into Lord Buchan's park, Matilda is his guard.

They spurr'd their steeds and furious flew Like lightning o'er the lea; They reach'd Lord Buchan's lofty tow'rs By dawning of the day.

Matilda stood without the gate, To whom the Graham did say - Saw ye Sir James the Rose last night, Or did he pass this way?

Last day at noon, Matilda said, Sir James the Rose passed by; He furious pricked his sweaty steed, And onward fast did hie.

By this he is at Edinburgh, If horse and man hold good; Your page then lied, who said he was Now sleeping in the wood.

She wrung her hands and tore her hair, Brave Rose, thou are betrayed, And ruined by those means, she cried, From whence I hoped thine aid.

And now the valiant knight awoke, The virgin's shrieks he heard; Straight up he rose and drew his sword When the fierce band appeared.

Your sword last night my brother slew, His blood yet dims its shine, But ere the setting of the sun Your blood shall reek on mine.

You word it well, the chief replied, But deeds approve the man ; Set by your men, and, hand to hand, We'll try what valour can.

Oft boasting hides a coward's heart, My weighty sword you fear, Which shone in front of Flodden Field When you kept in the rear.

With dauntless step he forward strode, And dared him to the fight, But Graham gave back and feared his arm, For well he knew its might.

Four of his men, the bravest four, Sunk down beneath his sword , Bui still he scorned the poor revenge, And sought their haughty lord.

Behind him basely came the Graham, And pierced him in the side; Out spouting came the purple stream, And all his tartans dyed.

But yet his hand dropped not the sword , Nor sunk he to the ground, Till through his enemy's heart his steel, Had forced a mortal wound.

Graham, like a tree by wind o'erthrown, Fell breathless on the clay, And down beside him sunk the Rose, And faint and dying lay.

Matilda saw, and fast she ran, Oh, spare his life, she cried: Lord Buchan's daughter begs his life, Let her not be denied.

Her well-known voice the hero heard, He raised his death-closed eyes, And fixed them on the weeping maid, And, weakly, thus replied:

In vain Matilda begs the life By Death's arrest denied; My race is run? Adieu! My love, Then closed his eyes and died.

The sword, yet warm, from his left side, With frantic hand she drew; come, Sir James the Rose, she cried, I come to follow you.

The hilt she leaned against the ground And bared her snowy breast, Then fell upon her lover's face, And sunk to endless rest.

Another version of lyrics of Sir James the Rose:

O heard ye o' Sir James the Rose, The young heir o' Baleichan? For he has killed a gallant squire, Whase friends are out to tak him.

Now he is gane to the house o' Mar, Whaur nane might seek to find him; To see his dear he did repair, Weining she would befriend him.

'Whaur are ye gaun, Sir James?' she said, 'O whaur awa are ye riding?' 'I maun be bound to a foreign land, And now I'm under hiding.

'O gae ye doon to yon laigh hoose, I shall pay there your lawing, And as I am your leman true, I'll meet you at the dawing.'

'I'll no gae doon to yon laigh hoose, For you to pay my lawing, But I'll lie doon upon the bent, And bide there 'till dawing.'

He's turned him richt round about And rowed him in his brechan (plaid), And laid him doon to tak a sleep In the lawlands o' Baleichan.

He wasna weel gane out o' sight, Nor was he past Milstrethen, When four and twenty belted knights Cam riding owre the Lethan.

'O hae ye seen Sir James the Rose, The young heir o' Baleichan? For he has killed a gallant squire, And we are sent to tak him.'

'Yes, I hae seen Sir James,' she said, 'He passed by here on Monday; Gin the steed be swift that he rides on, He's passed the Hichts o' Lundie.'

But as wi' speed they rade awa, She loudly cried behind them, 'Gin ye'll gie me a worthy meid, I'll tell ye whaur to find him.'

'O tell, fair maid, and on our band, Ye'se get his purse and brechan.' 'He's in the bank aboon the mill, In the lawlands o' Baleichan.'

They sought the bank aboon the mill, In the lawlands o' Baleichan, And there they found Sir James the Rose, Lying sleeping in his brechan.

Then out an spake Sir John Graeme, Wha had the charge in keeping, 'It's ne'er be said, my stalwart feres, We killed a man sleeping.'

They seized his braid sword and his targe, And closely him surrounded, And when he waked out o' his sleep, His senses were confounded.

'Rise up, rise up, Sir James,' he said, 'Rise up since now we've found ye; We've ta'en the braid sword frae your side, And angry men are round ye.'

'O pardon, pardon, gentlemen, Hae mercy now upon me!' 'Such as you gave, such shall you have, And so we fall upon thee.'

Syne they took out his bleeding heart, And set it on a spear, O, They took it to the house o' Mar, And showed it to his dear, O.

'We couldna gie ye Sir James' purse, Nor yet could we his brechan, But ye shall hae the bluidy heart, O' the young heir o' Baleichan.'

'Sir James the Rose, O for thy sake My heart is now breaking; Cursed be the day I wrocht thy wae, Thou brave heir o' Baleichan!'

Then up she raise, and forth she gaes, And in that hour o' tein, O, She wandered to the dowie glen, And never mair was seen, O.