Find traditional instrumental music
This is the stable version, checked on 23 December 2020.
Jump to: navigation, search

Back to Abbot's Bromley Horn Dance

ABBOT'S BROMLEY HORN DANCE, THE. AKA and see "Robinson's Tune." English, Dance Tune. G Minor. Standard tuning (fiddle). AB: AABBCC (Sharp). See also notes for "Edie Sammon's Tune," "St. Anne's Tune", "Bobby Shafto" "And Her Golden Hair Was Hanging Down Her Back" "William Adey's Tune" "Cock of the North" The Abbots Bromley Horn Dance is an ancient tradition of the village of Abbots Bromley, Staffordshire, England, that takes place on Wakes Monday, the first Monday after the first Sunday after the 4th of September. The dance dates back to Anglo-Saxon times and commemorates the granting of hunting rights to the villagers in Needwood Forest, but it also is said to compose elements of an ancient fertility dance (i.e. the taking of horns, a fertility symbol, around to local farms). The horns used in the dance are reindeer antlers. 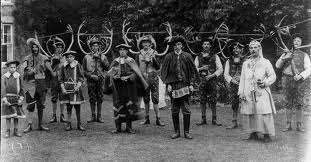 Besides the yearly performance at Abbots Bromley, the dance can be seen each year on stage during the revivalist "Revels" performances in many cities throughout North America during the Yule season. The accompanying tune is known as the "1857 air," that date that it was collected, or as "Robinson's Tune". William (sometimes given as 'Richard' or 'Henry') Robinson (c. 1790-c.1860) was a fiddler and wheelwright from Abbot's Bromley, some of whose music was noted by Robert Buckley (c. 1857-58), Staffordshire. Buckley wrote to Sharp that Robinson "was famous at the time as the only man who could play the Horn Dance air." However, as with many traditional dances, any tune is liable to be played as the official prescription has been to dance to "the popular tunes of the day," including, in modern times, "Isle of Capri"! "Robinson's Tune" is inextricably associated with the dance in the U.S. due to John Langstaff, creator of the Revels, who saw it performed in Thaxted, England, and who was taken with the haunting Robinson melody. The Revels' recreations of the danced (like the Thaxted version) come in for some criticism as being artificially "atmospheric," and unlike the character of the village dance. See also "Flaxley Green Dance" for another of Robinson's tunes, and "Singing the Travels" which uses both strains of "Abbot's Bromley Horn Dance."

Back to Abbot's Bromley Horn Dance