Back to Bare-Footed Quaker (The)[edit]

BARE-FOOTED QUAKER, THE. English, Morris Dance Tune (6/8 time). G Major. Standard tuning (fiddle). AAB, repeat five times. The morris dance and tune is from the town of Lichfield, Staffordshire, in England's Cotswolds. The title is thought to be a reference to the founder of the Quaker movement, George Fox [1] (1624-1691). In 1650 (the same year--in November--that John Playford published his English Dancing Master in London), he was imprisoned for blasphemy in Derby Gaol, where a judge mocked Fox's exhortation to "tremble at the word of the Lord", calling him and his followers "Quakers". Upon his release he sped to the market square and denounced the town of Lichfield, later saying he was "commanded by the Lord of a sudden to untie my shoes and put them off ... so I went down the streets crying with a loud voice 'woe unto the bloody City of Lichfield.'" 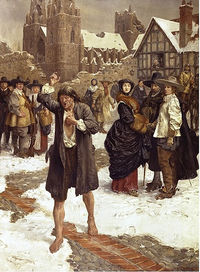 Back to Bare-Footed Quaker (The)[edit]