Find traditional instrumental music
This is the stable version, checked on 24 June 2019.
Jump to: navigation, search

Back to Barlow Knife (1)

BARLOW KNIFE [1]. AKA and see "Blue Goose (1)," "Cabin Creek (1)." Old-Time Breakdown and Song. USA, Virginia, West Virginia, Kentucky, Mississippi. G Major (most versions, but also played in the key of D). Standard tuning (fiddle). AB (Silberberg): AABB: AABBCC (Johnson, Phillips). "Barlow Knife" is a fairly well-known song/tune in the American south, with a number of more or less closely related variants. The title refers to a type of folding pocket knife that features double or single blades that open at one end only. The knife-style bears the name of a man named Barlow of Sheffield, England, one of the earliest and most famous makers. 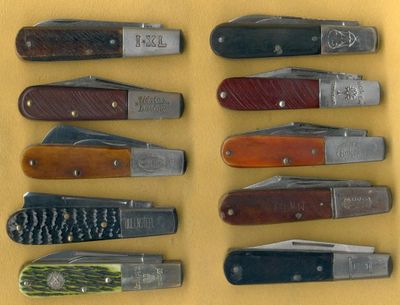 I been livin' here all my life,
All I got is a Barlow Knife;
Buck horn handle and a Barlow blade,
Best dang knife that ever was made.

I've been married all my life,
And all I've got is a Barlow knife.

Glen Lyn, Virginia, fiddler Henry Reed called the tune "Cabin Creek (1)," and fiddle players have tended to use that title (banjo players more frequently refer to it as "Barlow Knife"). Jeff Titon (2001) says a variant of the tune is "I've Got a Grandpa," and Kentucky fiddler Buddy Thomas played another variant under the title "Blue Goose (1)." Mark Wilson reports that it was called "Boating Up Sandy (7)" (somewhat of a floating title-it has been attached to several tunes) in the Portsmouth, Ohio, region. Titon concludes that the tune was fairly widespread in the South under the "Barlow" title and variants, such as "Buckhorn Handle and a Barlow Knife/Blade." See also the related "Josie-O/Josie Girl".

Back to Barlow Knife (1)