Back to Blackberry Blossom (4)

'BLACKBERRY BLOSSOM [4]'. AKA and see "Garfield's Blackberry Blossom." American, Reel. USA, Kentucky. G Dorian. Standard tuning (fiddle). AABB: AABB' (Silberberg): AABBCC (Ed Haley). This tune is simply labeled "Blackberry Blossom" on older recordings[1][2], but has picked up the nomen (possibly originating with John Hartford) "Garfield's Blackberry Blossom" to distinguish it from the related, later tune by Arthur Smith. Kentucky fiddler Dick Burnett said he learned his version from Ed Haley[3], a legendary fiddler in eastern Kentucky (elsewhere Burnett said he actually learned the tune from northeastern fiddler Bob Johnson, who got it from Haley). The tune was in fact Haley's signature tune, much associated with him, although he never commercially recorded it[4]. 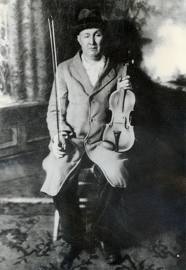 A story about the origin of the Garfield title comes from Jean Thomas's book "Ballad Makin' in the Mountains of Kentucky"[5]. According to America “Aunt Meckie” Morrison in a story regarding her husband Christopher Columbus Morrison, a General Garfield (inferred to be Brigadier General and future president James A. Garfield) named the tune during the Civil War after hearing a man named Chris playing it on the harmonica. The musician remarked that it was his favorite tune, but said he couldn't remember the title. Garfield then expectorated a stream of tobacco juice onto a white blackberry bush blossom, and thus the tune was named. The story of Garfield's association with the tune was later mentioned by their son[6], Ed Morrison, on a recording by Jean Thomas for the Library of Congress[7]. Morrison stated that Garfield learned the tune from his father during the Civil War.

Christopher Columbus Morrison was born about 1846, was living in Greenup County in 1860[8], and enlisted in November 1863 in Company “G” of the 45th Regiment, Kentucky Infantry[9][10]. This was about the same time James A. Garfield left the army and returned to Ohio to take his seat in Congress[11], which makes the story of his naming the tune somewhat unlikely, although it is possible that Morrison encountered Garfield during the Big Sandy Expedition in 1861 or 1862. Morrison died in 1926 in Ashland.[12]

Betty Vornbrock and others have noted a similarity between "Garfield's Blackberry Blossom" and the West Virginia tune "Yew Piney Mountain (1)," a variant[13]. This version was also played by Kentucky fiddlers J.P. Fraley and Santford Kelly, and been recorded by Owen "Snake" Chapman as well. Jean Thomas recorded the tune for the Library of Congress in 1934 from fiddler Ed Morrison (Boyd County, Ky.) at the American Folk Song Festival (AFS 300A)[2] .

Back to Blackberry Blossom (4)