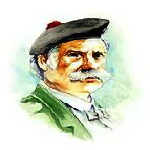 BOVAGLIE'S PLAID. AKA – "Roualeyn's Plaid." Scottish, "Pastoral" or Slow Air (4/4 time). A Major. Standard tuning (fiddle). AAB. From the Logie Collection (1888), composed by fiddler-composer and dancing master J. Scott Skinner (1843-1927). The 'Roualeyn' of the alternate title (which was Skinner's original title for the tune) refers to one Roualeyn Gordon Cumming, a famous local eccentric character of Fort Augustus, Scotland, in the 19th century. Neil (1991) tells several charming anecdotes of this man who was a big game hunter in Africa for a time, and who dressed in full Highland kit when he came to town, though donned only in shirt and stockings in the country on hot days. A congenial and well mannered man, he was sometimes to be found in the woods of Glenmoriston where he sought hazel to make walking sticks, that is when he was not puttering about his showroom where he housed his trophies. He was a great friend of the huge village blacksmith, Donald Cumming, who himself was blessed with "a high intellect and warm personality. They both died within a short period of one another and Fort Augustus lost two of its outstanding characters" (Neil, 1991).
The title 'Bovaglie's Plaid' is from a description of Queen Victoria's of a location on the farm or place of Bovaglie, thought to be near Crathie in Deeside, in which a belt of trees seemed to her to stand in the shape of a plaid. It is remembered by locals in the saying that the wood ‘haps, shelters, Bovaglie ferm like a plaid.’ The melody was one of the tunes recorded as played by the composer on tour in 1921, late in his life, in a set romantically entitled "Spey's Fury's." Caoimhin Mac Aoidh points out the first few bars of "Bovaglie's" overlap with "Lowlands of Holland (The)."