Find traditional instrumental music
This is the stable version, checked on 26 April 2021.
Jump to: navigation, search

Back to Brechin Castle (1) 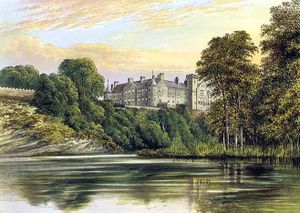 BRECHIN CASTLE [1]. AKA and see - Miss Douglas of Brigton, Lady Harriot Hay's Strathspey. Scotland, Strathspey. B Flat Major (most versions): A Mixolydian (McLachlan). Standard tuning (fiddle). AB (Surenne): AAB (Balmoral, Gow, Hunter, Lowe): AABB (Honeyman, Kerr, McLachlan, Skye): AABB' (Athole). A popular and frequently published strathspey. The melody was known by the alternate titles until Gow published it under the "Brechin Castle" title in his 1st Repository (1799). The name Brechin is purportedly derived from Brychan the son of Brychan, who moved to the area from southern Wales. The Round Tower at Brechin probably dates from around c. 990 when Kenneth II took control of the area. Subsequently, around 1150, a cathedral and bishopric were founded there. Hunter (1988) notes that Brechin Castle [1] is the seat of the Earls of Dalhousie. "Brechin Castle" (misspelled as "Brichin Castle") was also entered into the music copybook [2] of John Buttery (1784-1854), a fifer with the 37th Regiment, British army, who served from 1797-1814 and who late in life emigrated to Canada. Buttery's manuscript collection has also been identified as belonging to John Fife [1], with a suggested date of 1780. Fife was a family name, like Buttery, identified with the manuscript. The fifer set it in the fife-friendly key of 'G' major, in reel time, rather than as a strathspey.

Back to Brechin Castle (1)