Find traditional instrumental music
This is the stable version, checked on 5 October 2021.
Jump to: navigation, search

BRIDGE OF PERTH [1], THE. Scottish, Reel and Strathspey. A Mixolydian. Standard tuning (fiddle). AB (Ross, Surenne): AAB (Gow, Mackintosh, McGlashan, Skye): AABB (Athole, Lowe). Composed by Daniel Dow, probably to commemorate the opening of the Tay bridge at Perth, completed in 1772. The tune was first published the following year. John Glen (1891) finds the tune first printed in Dow's c. 1775 collection (p. 9), and Dow included it in another of his collections, published around the same time, Twenty Minuets and Sixteen Reels or Country Dances (p. 29).

Thomas Pennant crossed the new bridge in 1772 and wrote about it in his A Tour of Scotland and Voyage to the Hebrides, 1772 (published in 1776): 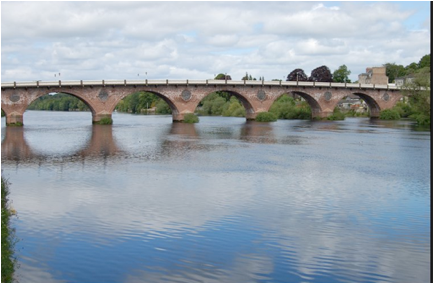 Ride over the bridge of Perth, the most beautiful structure of the kind in north Britain, designed and executed by Mr. Smeton [ed. Smeaton]]. Its length is nine hundred feet; the breadth (the only blemish) twenty-two with the parapets. The piers are founded ten feet beneath the bed of the river, upon oaken and beechen piles, and the stones laid in puzzalane, and cramped with iron. The number of arches nine; of which the centre is seventy-five feet in diameter. This noble work opens a communication with all the different great roads of the kingdom, and was completed at the expence of twenty-six thousand pounds: of this the commissioners of forfeited estates by his Majesty's permission, gave eleven thousand; Perth, two; private subscribers, four thousand seven hundred and fifty-six; the royal boroughs, five hundred. But this great work would have met with a check for want of money, had not the Earl of Kinnoull, with his characteristic public spirit, advanced the remaining sum, and tken the security of the tolls, with the hazard only to himself.