Back to Caledonian March (1)[edit]

CALEDONIAN MARCH [1]. AKA and see "Bonaparte Crossing the Rhine (1)," "Star of Bethlehem" (Pa.). Scottish, March (4/4 time). D Major. Standard tuning (fiddle). AABB. The march appears (under the 'Caledonian' title) in several of Boston music publisher Elias Howe's publications, including his Musician's Companion of 1842, whose contents were arranged by members of the Boston Brigade Band, a very popular and accomplished brass band. However, the earliest publication found to date is by Philadelphia music publisher George Willig, who issued it on a single sheet in 1837, arranged by "A professor". 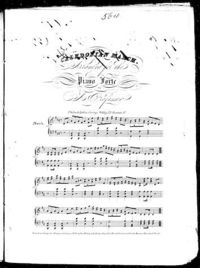 See also Bayard's (1981) note for "Dusinberry March (The)" and the "Star of Bethlehem," both closely related Pennsylvania collected marches. See also the Irish tunes "Comhra Donn (An)" and "Centenary March (The)," melodically similar in the 'A' part.

Back to Caledonian March (1)[edit]