Back to Camptown Hornpipe (2)

CAMPTOWN HORNPIPE [2]. AKA and see "Congo Prince Jig," "Granny Will Your Dog Bite? (2)" (Pa.). Old-Time, Reel. USA, Pa. D Major. Standard tuning (fiddle). AABB. Not the "Camptown Hornpipe (1)" in Burchenal, which is really the old country dance standard "White Cockade (1) (The)" married to the name of a dance called Camptown Hornpipe. Bayard (1981) collected several versions of this tune with the same or similar 'A' parts, but varying 'B' parts. See notes for "Harry Cooper" and "Granny Will Your Dog Bite? (2)" for other examples of this 'tune-patching'. Hans Nathan (Dan Emmett and Negro Minstrelsy, Univ. of Oklahoma Press, 1962, p. 93) mentions a 'Camptown Hornpipe' that was an old blackface minstrel dance or series of steps. 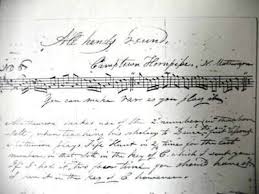 Music notation for "Camptown Hornpipe (2)" from the playing of Nelson Mathewson, appears in the music manuscripts of Long Island fiddler and painter William Sidney Mount. Mathewson was a "somewhat besotted" character, a fiddler and dancing master who was a friend and playing partner of Mount's [see Mathewson's Hornpipe for more. Directions for the dance "All Hands Round" appear on the page with the notation.

The "Camptown Hornpipe" is specifically mentioned in this advertisement from advertisement from the July 8, 1844, New York Herald, touting a "match" or dancing contest. Such arranged "competitions" served to help drum up interest in an event (much as is done in modern times in pro wrestling 'grudge matches', etc.):

GREAT PUBLIC CONTEST Between the two most renowned dancers in the world, the Original JOHN DIAMOND and the colored boy JUBA, for a Wager of $200, on MONDAY EVENING July 8 at the BOWERY AMPHITHEATRE, which building has been expressly hired from the Proprietor, Mr. Smith, for this night only, as its accommodations will afford all a fair view of each step of these wonderful Dancers. The fame of these two Celebrated Breakdown Dancers has already spread over the Union, and the numerous friends of each claim the Championship for their favorite, and who have anxiously wished for a Public Trial between them and thus known which is to bear the Title of the Champion Dancer of the World. The time to decide that has come, as the friends of Juba have challenged the world to produce his superior in the art for $100. That Challenge has been accepted by the friends of Diamond, and on Monday Evening they meet and Dance three Jigs, Two Reels, and the Camptown Hornpipe [emphasis mine]. Five Judges have been selected for their ability and knowledge of the Art, so that a fair decision will be made. Rule—Each Dancer will select his own Violin and the victory will be decided by the best time and the greatest number of steps.

Back to Camptown Hornpipe (2)