Back to Castlebar Races 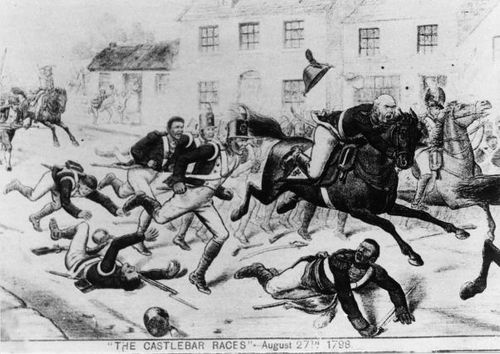 "The Castlebar Races" was a derisive reference to the rapid withdraw of the British Army back to their barracks during one of the skirmishes on the march to take Sligo Town by the combined forces of the Irish and French under Humbert during the Irish Rebellion of 1798. The English forces, who greatly outnumbered their foes, took up position at Sion Hill just outside Castlebar, County Mayo, and greeted Hubert with cannon fire as he approached. The general decided to regroup and to divide his troops, sending them left and right to attack the English flanks. In an inspired act of guerrilla warfare, the Irish drove a herd of cattle ahead of them causing confusion in the English ranks in the center, then capitalized upon by an effective bayonet charge by Irish and French forces causing the English to retreat down Staball Hill. Another attack occurred at Main Street Bridge which the English defended for some time with forces from the Longford and Kilkenny militias and a Scottish regiment called Frazier's Fencibles, but eventually they too were routed and fled towards Tuam and Athone in the famous 'races of Castlebar.' The Irish/French victory has been described by Thomas Pakenham in The Year of Liberty as "one of the most ignominious defeats in British military history". Unfortunately, the combined French/Irish forces were eventually stopped and the defeated outside Colooney, just short of their goal. Today there is a monument at the site to Teeling, one of the Irish leaders of the force. General Humbert surrendered and he and his French troops were allowed to depart. His Irish allies were not treated as prisoners of war by the British, but rather as traitors and were harshly dealt with as such.

The tune was recorded in New York in 1922 by County Sligo fiddler James Morrsion, as the second tune paired with "Mist on the Meadow (2)" AKA "Maid in the Meadow"; similarly, County Sligo fiddler Michael Coleman recorded it as the second tune in his medley "Up Sligo." "Castlebar Races" was recorded somewhat later (in the 1930s) by flute playing duet of John McKenna and Eddie Meehan although, confusingly, with the title "Mist on the Meadows", perhaps picked up from the first tune of Morrison's recording. Peter Kennedy's "Whiskey and Brandy" is a closely related tune, perhaps a version of "Castlebar Races." The second strain is shared with that of "Lost and Found." See also the variant "James O'Byrne's."

Back to Castlebar Races