Cliffs of Moher (The)

Back to Cliffs of Moher (The)[edit]

CLIFFS OF MOHER, THE (Aillte Motair Ua Ruadain). Irish, Double Jig. A Dorian (most versions): G Major (Harker/Rafferty, O'Neill/1850): A Major (Levey). Standard tuning (fiddle). AAB (Carlin, Moylan, O'Neill/1850 & 1001): AABB' (Cranitch, Harker/Rafferty, Mallinson, O'Neill). The Cliffs of Moher are situated on the Atlantic coast northwest of Lahinch, in County Clare. They stretch some eight kilometers from Hag's Head to O'Brien's Tower and reach 200 meters in height. They take their name from a ruined promontory fort, Mothar, which was demolished during the Napoleonic wars to make room for a signal tower. Although the tune is noted in G Major in O'Neill's/1850 and A Major in Levey's 1873 collection, it is usually heard played in the A Dorian mode, and indeed, O'Neill's version is quite distanced from the commonly heard modern version. "Last of the Lot," with the part reversed, is a related tune. 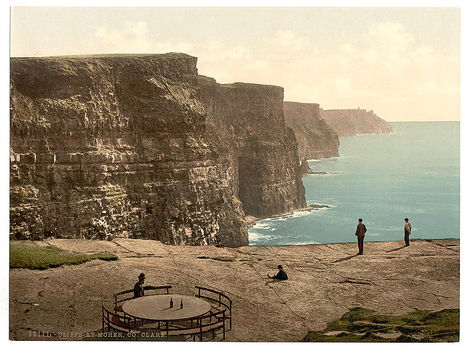 Sources for notated versions: accordion player Johnny O'Leary (Sliabh Luachra region of the Cork-Kerry border) [Moylan]; Francis O'Neill learned the tune from an accomplished West Clare flute player (and Chicago police patrolman) named Patrick "Big Pat" O'Mahony, a man of prodigious physique of whom he said: "...the 'swing' of his execution was perfect, but instead of 'beating time' with his foot on the floor like most musicians he was never so much at ease as when seated in a chair tilted back against a wall, while both feet swung rhythmically like a double pendulum" [O'Neill, Irish Folk Music]; New Jersey flute player Mike Rafferty, born in Ballinakill, Co. Galway, in 1926 [Harker].

Back to Cliffs of Moher (The)[edit]