Find traditional instrumental music
This is the stable version, checked on 24 October 2022.
Jump to: navigation, search

Back to Colonel John Irwin

COLONEL JOHN IRWIN (Pleraca Iarbain). AKA and see “Colonel Irwin,” "Planxty Irwin," "Oh! Banquet Not." Irish, Planxty (6/8 time, "spirited"); New England, Waltz. D Major (Brody, Haverty, Matthiesen, O'Neill): C Major (Complete Collection..., O’Sullivan): G Major (Barnes, Cranitch, Ó Canainn, O'Flannagan). Standard tuning (fiddle). One part (Ó Canainn): AB (Complete Collection, Cranitch, Haverty, O’Sullivan): AAB (Matthiesen, O'Neill/Krassen): AABB (Barnes, Brody, O'Flannagan, O'Neill/1850, Tubridy). Composed by blind Irish harper Turlough O'Carolan (1670-1738) for a patron, Colonel John Irwin (1680-1752) of Tanrego House (situated on Ballysodare Bay, in the townland of Tanrego West), County Sligo. The melody continues to be one of Carolan's most popular compositions today, and has frequently been recorded. Donal O’Sullivan (1958) thought the lively air and song was composed around the year 1713 after Irwin’s return from overseas wars, as O’Carolan’s song to the tune mentions Irwin’s military exploits in Flanders. The Irwin family were originally English grantees of lands in Ireland under the Cromwellian Settlement in the mid-17th century, expanded in settlement of arrears of military pay. They were neighbors of the Crofton family of Longford House, Catholic gentry, who lived a few miles south. Although the Irwins fought for the Williamite side during the Jacobite wars, the Croftons gave them refuge when they were in need (see O’Sullivan, 1958, notes to No. 59). Thaddaeus Connellan translated the Irish verses into English, keeping the Gaelic character, in his An Duanaire (1829):

We will take our way without delay
To see a Noble, brave and gay,
The gallant Colonel near the sea,
Him I mean to treat of;
With mirth and joy he fills his glasses,
Delights to cheer both lads and lasses,
This is John I will answer,
The brave English Irelánder.

The noted Irish piper, fiddler and composer Walker "Piper" Jackson composed a piece in the mid-18th century called "Jackson's Welcome Home" that uses a strain quite similar to O'Carolan's first strain. Bayard (1981) opines that the strain was "by no means of striking originality," and that the use by Jackson may have been accidental, that the two composers may have been influenced by an earlier tune, or that Jackson may have been "unconsciously" influenced by O'Carolan's tune. The air appears in flute teacher John Clinton's Gems of Ireland (1841) under the idiosyncratic title "Planxty Truine," and was entered as an untitled 6/8 tune in Book 3 of County Leitrim piper and fiddler Stephen Grier's (c. 1824-1894) large c. 1883 music manuscript collection. The air was adapted by Thomas Moore for his song "Oh! Banquet Not." 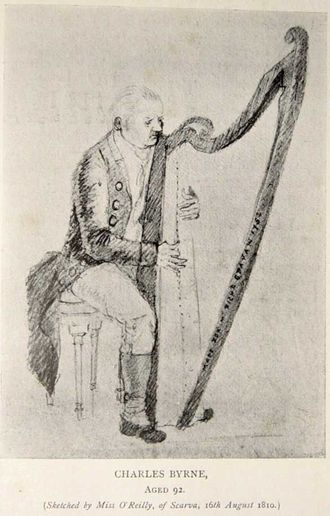 Back to Colonel John Irwin