Back to Cripple Creek 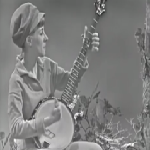 CRIPPLE CREEK: In 1965, Tracy Newman did 6 episodes of a public TV series for children called "What's New." She presented folk songs from all over the world, and many instruments, to the best of her ability at the time.

CRIPPLE CREEK. AKA – "Going Up Cripple Creek," "Going Down Cripple Creek," "Going Up Brushy Fork," "Going Down Brushy Fork," "Going Up Shootin' Creek," "Going Down Shootin' Creek," "Red Creek," "Shooting Creek (3)." American, Reel (cut time). USA, Widely known. A Major (Beisswenger & McCann, Brody, Phillips): C Major (second of Thede's versions): G Major (Beisswenger & McCann, Ford). Standard, GDgd, AEae, ADae, AEac# tunings (fiddle). AABB (Beisswenger & McCann, Brody, Phillips, Thede): AABBCC (Ford): AA'BBCC' (Phillips/1994). The tune had and still has wide currency throughout the South, although more popular in the Appalachians than in the Midwest. There have been several suggestions about the origin of the title and tune, with modern speculations that 'cripple' refers to a 'crooked' or meandering stream. The Oxford English Dictionary lists two relevant American meanings of 'cripple' current in the 19th century: a) a dense thicket in swampy or low-lying ground, and b) a lumberman's term for a rocky shallow in a stream. Folklorist Alan Jabbour, of the Library of Congress found that the oldest Appalachian fiddlers he collected from could recall the first time that they had heard "Cripple Creek," leading Jabbour to speculate that the title might have something to do with the Cripple Creek, Colorado, labor troubles. Gold had been discovered there in 1891 and the labor disputes date from 1903–1904.

Jabbour may be right, although not only was Cripple Creek an important mining town, but it also had a reputation-the town featured several brothels, including Ella Holden's The Library, Pearl Sevan's Old Faithful, and Hazel Vernon's Old Homestead. In 1897 Hazel sold her establishment, intent on a comfortable retirement in California, and Pearl DeVere took it over. Pearl, however, ran into financial problems, and one night, The Cripple Creek Times article of the time reported, "a gay party was in full swing when Pearl excused herself, saying that she felt indisposed. She refused to let anyone go with her to her room. She was in high spirits all evening, a woman said, and never seemed happier or more carefree." Pearl took an intentional overdose of morphine, and was found the next morning, fully clothed and sprawled across her bed. Her assets did not cover the cost of her burial, and an appeal was made for donations "to give the little girl a real sendoff", as one Bennett Ave. bartender was heard to remark. Indeed, it was reputed to have been Colorado's biggest funeral to that date, featuring contingents from the local fire companies, the Elk's band, and men from Union Hall. Women from the dance halls and brothels decked themselves out and rode behind in rented carriages. All heard the Reverend Franklin in the January cold deliver a short eulogy based on the parable, "let him who is without sin cast the first stone."

Many think the tune and title older than the turn of the 20th century labor disputes, and point out an equally likely candidate for the title's origins lie with the Cripple Creek that flows through Grayson and Carroll Counties in Virginia, emptying into the New River. Betty Vornbrock reports that there is a 'town' by the name of Cripple Creek south of Wytheville, in Wythe County adjacent to Grayson County, near Elk Creek and Bull Mountain (both in Grayson). The story she heard is that "hunters were on the trail of a large buck elk who led them over Buck Mountain, then along and across Elk Creek and on up north till they shot him, but only crippled him, at Cripple Creek." Mike Yates (2002) confirms that "most Virginia musicians believe that it relates to a location in Wythe County, Virginia." Still, the tune probably has no great antiquity. Glen Lyn, Virginia, fiddler Henry Reed (1884–1968), for example, told Alan Jabbour that he was sixteen years old when he first heard "Cripple Creek." Jabbour explains that Reed said the man who first played it for him was from Texas and was simply passing through the Tug River region (i.e. Tug Fork of Big Sandy River) of the West Virginia/Kentucky border, where Reed and his brother were employed as young men in the coal country region of southern West Virginia doing blacksmith work (which perhaps does argue for western origins for the tune). The English folk-song collector Cecil Sharp picked up a version (called "Gone to Cripple Creek") during his 1917 collecting trip in the Appalachians.

These ditty, or similar rhymes, were collected with the tune from various sources:

I've got a girl and she loves me, she's as sweet as she can be;
She's got eyes of baby blue, makes my gun shoot straight and true

I went down to Cripple Creek,
To see what them girls had to eat;
I got drunk and fell against the wall,
Old corn likker was the cause of it all. (this stanza is shared with the song "Old Corn Liquor"-see the Frank C. Brown Collection, North Carolina )
Well I married a wife in the month of June, married her up by the light of the moon.
We live down on Cripple Creek, we've been there about a week.

Kiss her on the mouth just as sweet as any wine,
Wraps herself around me like a sweet potato vine!
' Roads are rocky and the hillsides' muddy,
I'm so drunk that I can't stand steady. ......(A floating verse, see also "Sally Goodin.")

The night was dark and the river was muddy,
Got so damn drunk I couldn't keep steady;
I give a little whoop and I give a little yell,
The horse run away, throwed the buggy all to Hell.

North Carolina banjo player and singer Charlie Poole recorded the song with the North Carolina Ramblers, adding verses which referred to the Shooting Creek region of Franklin County, southwest Virginia, famous for many years as a center for distilling homemade whiskey (becoming notorious for the commodity during the Prohibition). Poole was a frequent visitor, according to Tom Carter and Blanton Owen (1978).

Back to Cripple Creek