Back to Cronin's Favorite (1)[edit] 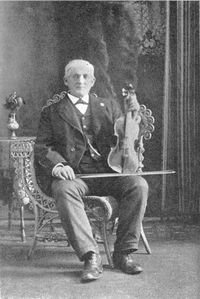 Source for notated version: Chicago fiddler Edward Cronin [O'Neill] Cronin (c. 1838-c. 1918) was originally from Limerick Junction, County Tipperary and was a weaver by trade. O'Neill considered him one of the two best fiddlers in Chicago, and had a wealth of tunes from him. O'Niell traveled twelve miles each way to his house for two years, playing and transcribing tunes, until they had a falling out (which O'Neill confessed he was at a loss to understand, although placing it squarely on Cronin). O'Neill remarks:

...he would play on for hours at a time such tunes as memory presented, his features while so engaged remaining as set and impassive as the sphinx...it was his open boast that he never forgot nor forgave an injury.

Back to Cronin's Favorite (1)[edit]