Back to Cumberland Gap (4) 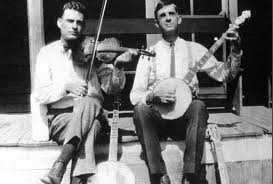 Leonard Rutherford & Dick Burnett
Jeff Titon (2001) believes source Leonard Rutherford [1] (c 1900-1954) may have learned this tune from African-American fiddler Cuje Bertram, who was a friend and sometimes informal playing partner and stand-in. Rutherford recorded the tune for Gennett Records in Richmond, Indiana, in 1928 with long-term playing partner Dick Burnett, with whom he was together with for some thirty-five years, and with guitarist Byrd Moore. Gennett released the record with "Moore, Burnett & Rutherford" credited on the label, and also issued it on their subsidiary label, Supertone, albeit as performed by "Southern Kentucky Mountaineers." Titon has found the tune title among those included in the 1915 Berea, Kentucky, tune lists and in records of Berea fiddle contests for 1919, 1920 and 1924.

Pocahontas County, West Virginia, fiddler Edden Hammons (1875-1955), born a generation earlier than Rutherford, played a similar version of "Cumberland Gap," albeit in two parts. The second strain of Hammons' version is quite similar to the second strain of the Irish reel "Tom Ward's Downfall."

Back to Cumberland Gap (4)