Find traditional instrumental music
This is the stable version, checked on 28 September 2019.
Jump to: navigation, search

Back to Dittany Tea

DITTANY TEA. American, Polka (cut time). C Major ('A' Part) & G Major ('B' and 'C' parts). Standard tuning (fiddle). ABC. "Dittany Tea" is from the repertoire of instrument repairman and fiddler Jimmy Wheeler (1917-1987) of Portsmouth, Scioto County, Ohio, located on the Ohio River, and the border with Kentucky. Dittany Tea (Cunila origanoides) is a traditional greek herb, once (over) harvested wild from the mountainsides of Crete, however, there is an American plant called dittany that has been used medicinally for generations. Gunn's Domestic Medicine: Or Poor Man's Friend, in the Hours of Affliction, Pain and Sickness (1835) gives: 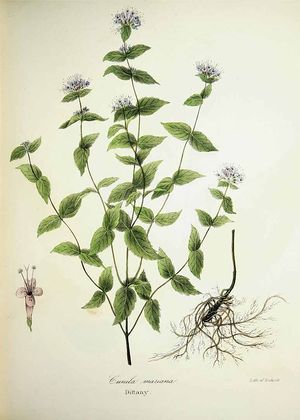 This handsome little plant belongs exclusively to America, and is known to almost every farmer and his family in the country. It grows plentifully in Tennessee. The dittany is always found in dry soils, and in shaky and hill places: it is used in slight fevers as a tea: every old lady in the country has more or less used dittany tea in colds. It is excellent to relieve nervous head aches, and is a good remedy in the hysterical affections of women. In South Carolina and Georgia, the dittany is given frequently be infusing the leaves in hot water and administering it as a tea, drank as warm as possible, to produce sweating. The medicinal virtues of dittany are much the same as penny-royal, mint, and sage: it is a perfectly innocent plant.[1]

Back to Dittany Tea