Back to Duchess of Athole's Favourite 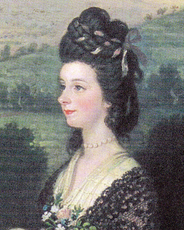 Jane Murray (nee Cathcart), Duchess of Atholl.
DUCHESS OF ATHOLE'S FAVOURITE. AKA and see "Kiss in the Kitchen." Scottish, Slow Air (6/8 time). A Major. Standard tuning (fiddle). AA'BBCC. The composition has been credited to the famous Perthshire fiddler-composer Niel Gow (1727-1807), although his name does not appear with the tune when it was printed in the Gow's 2nd Collection (1788). The title honors Jane (1754-1790), Duchess of Athole, daughter of one Lord Cathcart and sister to his successor. She married the John Murray, Duke of Athole, the day after Christmas, in 1774, in a double wedding with her younger sister, Mary (for whom see "Mrs. Graham of Ballgown's Reel"). The couple had four sons and four daughters. She died in London at age 36 in 1790, two years after the Gows published this tune.

Cape Breton fiddler Bill Lamey (1914-1991) played the tune as a waltz, although waltzes did not come into vogue until after Niel Gow died and it is doubtful he wrote it as a vehicle for that dance. The tune was also recorded by Cape Breton fiddler Dan R. MacDonald on and early LP with accompanist Lila Hashem, according to Paul Cranford.

Back to Duchess of Athole's Favourite