DUKE OF ATHOL'S FOREST LODGE, GLEN TILT. AKA and see "Ca' the Wethers to the Hill," "Duke of Atholl's Forest (The)," "Forest Lodge," "Glen Tilt Lodge," "Glentilt." Scottish, Strathspey (whole time). A Mixolydian. Standard tuning (fiddle). AB. Composed by John Crerar, a younger contemporary and pupil of Dunkeld fiddler-composer Niel Gow. Crerar was employed as a gamekeeper to the Duke of Atholl and composed a number of tunes for the family and their events. William Scrope wrote of him in the preface to his book The art of deer-stalking (1839): 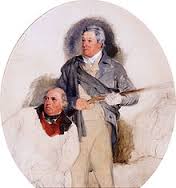 The Duke of Atholl with gameskeeper John Crerar, by Landseer. 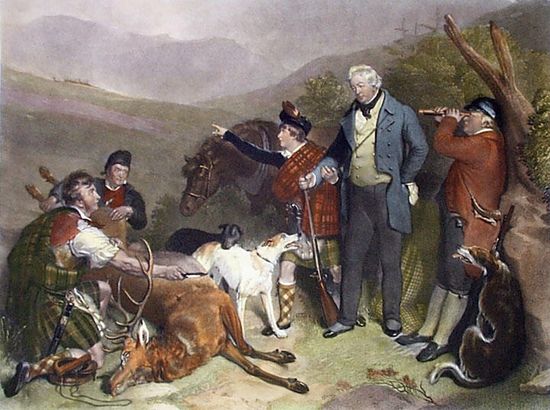 Death of a Stag by Edwin Landseer. Both Crerar and his son Charles are depicted in the group, at left.

Mr. John Crerar entered the Duke of Atholl's service in 1776. He was an honest, faithful, and most attached adherent, of astonishingly active powers, and possessed of admirable skill in stalking and shooting the deer; always selecting the finest harts. He was also a composer of music, and many a dance have the lads and lasses had to the sound of my old friend's violin. He is universally beloved, and now resides on his pension

at Pulney Lochside. The members of the Curling Club of Dunkeld lately presented him with a silver quaich upon the occasion of his attaining his ninetieth year, and as a token of their affection for him, and their admiration of the skill and ardour which he so long displayed in all manly games. Robert Crerar, one of his sons, is a wine-merchant in Swallow-street, and his cellars rejoice in the best Scotch whiskey. Charlie Crerar, another of his sons, is now head forester in Atholl.

Crerar is pictured in several paintings by Edwin Landseer, including The Death of a Stag at Glen Tilt and The Keeper John Crerar with his Pony. Landseer met him at Blair Atholl during his first visit to Scotland in 1824.

The forest lodge of the title, Glen Tilt, was a gatehouse that served as the hunting headquarters of the duke and his guests when sporting for deer. It was built in 1779, but had fewer sleeping quarters than required for larger parties, necessitating the construction of a bothy for the staff.

See also Crerar's compositions "Marquis of Tullibardine (The)," "Banks of Garry (The)," "Big Boat o' Inver (The)," and "Bridge of Garry (The)." His "Duke of Atholl's Forest (The)" is a similarly titled, but musically different tune.