Find traditional instrumental music
This is the stable version, checked on 9 March 2021.
Jump to: navigation, search

Back to Dunkeld Bridge

DUNKELD BRIDGE. AKA and see "Balkan Hornpipe," "Jerry Hayes." Scottish, Reel. F Major. Standard tuning (fiddle). AAB. This was the last tune the great Scottish fiddler and composer Niel Gow (1727-1807) composed in his lifetime. The name Dunkeld means the 'fort of the Caledonians' and refers to the people that dominated the central lowlands of Scotland during the time of the Romans (Matthews, 1972). Celtic monks, driven from Iona, established themselves there in the year 729 and Kenneth Macalpin made Dunkeld the ecclesiastical capital of his combined kingdom of the Scots and Picts in 849. Dunkeld has been much fought over. It was raided by Vikings in 903 and by Malcolm of Moray in 1027; it was the site of MacBeth's victory over Crinan and Maldred in 1045. In 1689 Captain Munro massacred an army of Highland supporters of James VII there. An 18th century view of Dunkeld. Dunkeld, Perthshire, is the larger village near Gow's home in Inver, on the Great North Road from Edinburgh to Inverness in the central Highlands. 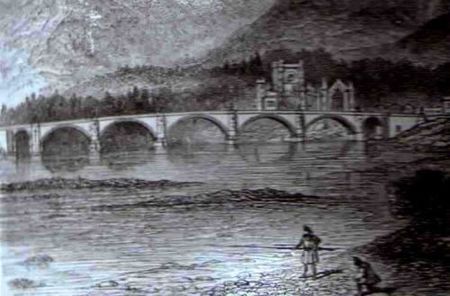 The bridge at Dunkeld spans the River Tay at a point where it is wide and deep, not fordable and difficult to cross by boat. A handsome bridge designed by Thomas Telford was completed in 1808 (after Niel's death, so if it was his last tune he probably did not see the completed structure) with money and lands donated by the Duke of Athole and from public funds. However, at the end, a debt of some £4,000 was still owed, and it was provided for by law that a toll should be charged for the eventual closing of the account. Unfortunately, the toll and its collection were left wholly to the Duke, with no accounting mechanism set in place. Over the years there arose a huge dispute between the Duke and the Perthshire population regarding this toll, which was not removed even though far more had been collected than was owed in the original debt. Resistance to the toll proved futile, until finally Highlanders took matters into their own hands and, in numerous vigilante actions, destroyed successive wooden toll bars. When the Duke countered by erecting an iron bar, the vigilantes took it down with sledgehammers. Numerous individuals were prosecuted for their actions, and it was not until 1878 that the Duke was forced to open his books to the public. Eventually he was made to return some £43,000 to the public coffers, and, the next year Parliament enacted a law banning tolls from the Dunkeld Brigde along with tolls on all the other bridges in the country (see New York Times article "The Dunkeld Bridge War: History of an Old Highland Feud" of Wednesday, December 15, 1879, for complete story).

Back to Dunkeld Bridge